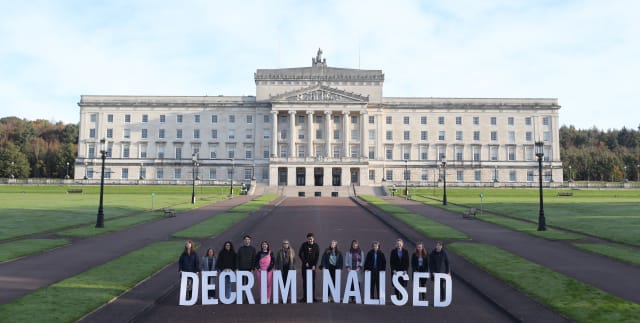 Allowing abortions in cases like Down’s Syndrome would not serve disabled people in Northern Ireland properly, Sinn Fein has said.

Campaigners accuse the party of “propping up” an anti-terminations agenda.

The procedures are available for women without restriction until the 12th week of pregnancy and are subject to more conditions after that.

Mid Ulster Assembly member Emma Sheerin said: “Our party position is one which calls for a compassionate and reasonable approach to healthcare, but not one that would see abortion treated as a mainstream, normalised option.”

Sinn Fein tabled an amendment to a DUP motion on the issue which is being debated at Stormont’s Assembly.

Ms Sheerin said it was necessary to build infrastructure which was inclusive and totally accessible to the disabled.

“Sinn Fein do not believe that a non-fatal foetal abnormality is an appropriate criterion for an abortion,” she said.

She added the party was adopting a modern and compassionate approach.

“We don’t support the DUP’s cynical attempt to attack the entire body of human rights-compliant healthcare for women,” she said.

“We are not in favour of blocking the right of women in a crisis to take a decision that they feel is the best for them just because other people are uncomfortable with it.”

Legislation was passed in Westminster which liberalised Northern Ireland’s strict laws governing access to the procedure.

It came into force in Northern Ireland in March.

The DUP’s Stormont motion “welcomes the important intervention of disability campaigner Heidi Crowter and rejects the imposition of abortion legislation which extends to all non-fatal disabilities, including Down Syndrome”.

Sinn Fein’s amendment reads: “Welcomes the important intervention of disability campaigner Heidi Crowter and rejects the specific legislative provision in the abortion legislation which goes beyond fatal foetal abnormalities to include non-fatal disabilities, including Down Syndrome.”

Ms Sheerin said the DUP’s motion would undermine the regulations in their totality, by stealth, and Sinn Fein was completely opposed to this.

She accused Stormont health minister Robin Swann of abdicating his responsibilities and failing to give clear direction to health trusts.

DUP leader Arlene Foster has urged Assembly members to send a message to Westminster that they do not agree with the proposals that MPs are putting forward.

She added: “If we do not uphold this motion we are signalling to every person with a disability that their life is valued differently to others’.

“It is wholly wrong for these discriminatory provisions to have been forced upon us.”