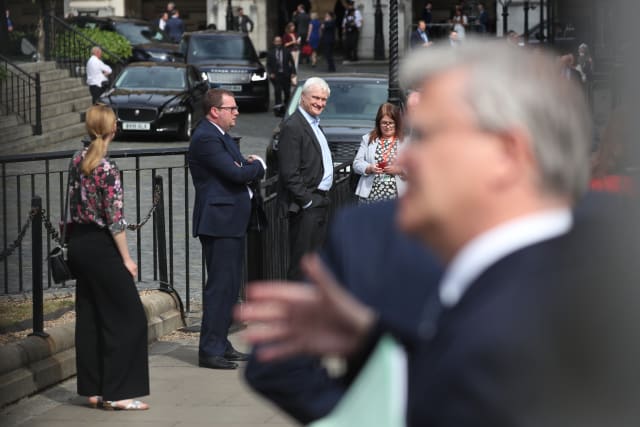 Chaotic scenes emerged in the House of Commons as MPs were forced to join an Alton Towers-style queue to decide their voting method during the Covid-19 pandemic.

Speaker Sir Lindsay Hoyle and his officials were left repeatedly shouting instructions at MPs as social distancing measures required them to join a queue, keep two metres apart, walk through the Commons chamber and announce their vote.

The queue stretched for several hundred metres, snaking through Westminster Hall and running to Portcullis House, the newer part of the parliamentary estate.

It came as the Government dropped procedures which allowed MPs to vote online and speak remotely via Zoom, thereby requiring them to appear in person to take part.

Conservative Karen Bradley, who chairs the Procedure Committee, moved an amendment to keep remote voting in place in the coming weeks, with several Conservative MPs rebelling to support the proposal.

After her amendment to the Government’s motion was pushed to a vote, Sir Lindsay said the queuing system would continue if MPs supported it as it is the “only method that is compatible” with Government-set requirements and those from Public Health England.

SNP MP Gavin Newlands (Paisley and Renfrewshire North) and Labour’s Ian Mearns (Gateshead) were among those to vote while wearing a t-shirt and shorts.

The Commons dress code requires male MPs to wear a suit, although this is not as strict during votes.

As some MPs dallied, Sir Lindsay could be heard telling them: “Why are we not keeping up? There are other members waiting.”

Some MPs also appeared confused at the new voting procedures.

Some Conservative MPs attempted to exit the chamber via the wrong door, despite being told by the Speaker moments earlier which way to go.

DUP MP Jim Shannon (Strangford) initially walked up to the “noes” column, before correcting himself and walking through the “ayes” section.

During the debate, Sir Lindsay appealed for “a bit of give and take” from the Government and opposition parties to ensure all MPs can continue to vote.

Commons Leader Jacob Rees-Mogg said he would table a motion on Wednesday which would enable MPs unable to attend Parliament on medical grounds to take part in certain proceedings, including questions, urgent questions and ministerial statements.

Mr Rees-Mogg said: “The stopgap of a hybrid Parliament was a necessary compromise during the peak of the virus, but by not being here the House has not worked effectively on behalf of constituents.”

He added he expects “teething problems” with the new voting system which involves queuing, adding it will be “some time before our proceedings are fully restored”.

Labour’s Chris Bryant joked “have you ever been to Alton Towers” to which Mr Rees-Mogg replied: “Indeed, yes I have, I took my sister Annunziata there many years ago.

“Enough of my reminisces because it is important that we protect, preserve, prioritise our parliamentary democracy, it has to continue regardless of the disease that is afflicting the nation.”

For Labour, shadow Commons leader Valerie Vaz questioned if Mr Rees-Mogg was “living in another universe” as the Covid-19 pandemic is ongoing before she asked questions on whether a risk assessment had been conducted for Black, Asian, and minority ethnic (BAME) parliamentary staff required back on the estate.

Ms Bradley said the current arrangements for a physical parliament are “far from optimal”, adding she was a traditionalist who wanted a return to normal as soon as possible.

But she also highlighted a conversation she had with Conservative MP Robert Halfon (Harlow) who was advised by his doctor that he must not attend Parliament for health reasons.

She said: “The idea that we decide today to disenfranchise him completely seems to me to be absurd.”

Tory former minister Jeremy Wright said “it cannot be right to exclude from our decision making any member against their will unless it is done for reasons of principle or because it is unavoidable”.

“Instantly a number of groups with protected characteristics are excluded, those who are pregnant or new mothers.

“Older members might be advised not to come here via public transport.

“The underlying health conditions of either members or their families are to be frank none of our business, but they will be excluded.”