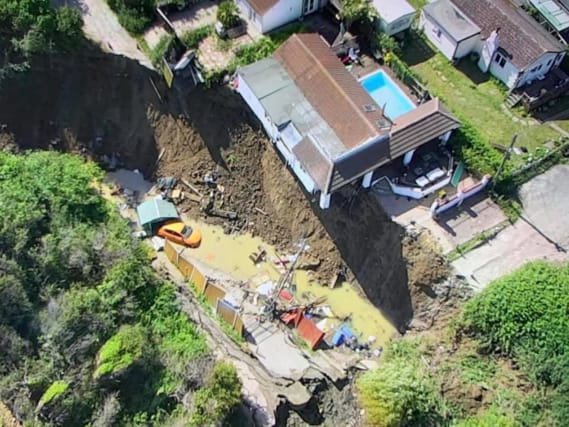 A family home that had been teetering on the edge after a cliff collapse has now fallen.

The house on the picturesque Isle of Sheppey had been left partially suspended over a sheer drop after a “significant cliff collapse” late on Friday.

Residents from 20 properties in Eastchurch had to be evacuated by firefighters and many have been unable to return to their homes.

Dramatic drone pictures taken by Kent Fire and Rescue Service after the initial collapse showed the sheer destruction caused, including an orange car lying at the bottom of a ravine.

The tragedy has been attributed to the “devastating impacts of coastal erosion” by the fire service.

There are fears that there could be further cliff collapses at the site.

A council spokesman said: “There has been further collapse at the site this morning, and the Cliff Hanger property has now fallen.

“Neighbouring properties are currently being inspected to assess the impact of this latest fall, and we are urging people to stay away from the area in case of further collapses.”

Fifteen people from four households remain in temporary accommodation while the incident goes on.

Swale Borough Council staff are trying to find them somewhere safe to live closer to their property.