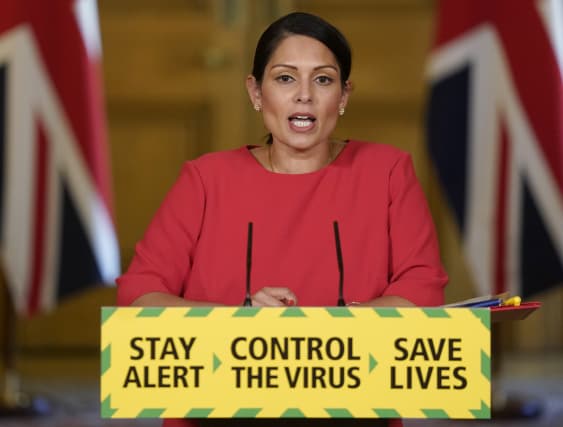 Foreign travellers who disobey forthcoming UK quarantine rules could be deported, according to new restrictions laid out by ministers.

The rules, due to be set out by Home Secretary Priti Patel on Wednesday, have caused unease in the Tory ranks and been condemned by businesses.

The plans, coming into force on June 8, will see people arriving in the UK told to isolate for 14 days to prevent coronavirus cases being introduced from overseas.

The Home Office said removal from the country would be considered “as a last resort” for foreign nationals who refuse to comply with the order to stay at a single residence.

A £1,000 fixed penalty notice in England will be levied on those failing to adhere, with prosecution and an unlimited fine potentially to follow, the department confirmed.

Failure to complete the form declaring where the person will live for two weeks will also be punishable by a £100 fixed penalty notice.

Ms Patel said: “Protecting the public’s health and avoiding a second peak that overwhelms the NHS will always be our top priority.

“As we get the virus under control here, we must manage the risk of cases being imported from abroad. We owe it to the thousands who’ve lost their lives not to throw away our progress.

“These measures are informed by science, backed by the public and will keep us all safe.”

The Government has vowed to review the measures, which will be in place across the UK but set individually by the devolved administrations, by June 29.

Ministers have said they will study the impact the restraints are having on the economy, as well the role antibody testing could have on lowering the health risk involved, when considering whether to alter the arrangements.

Transport Secretary Grant Shapps said: “These measures will be reviewed every few weeks, and we are working with the transport industry to see how we can introduce agreements with other countries when safe to do so, so we can go abroad and tourists can come here.”

Downing Street suggested on Tuesday that the restrictions would be similar to those imposed during the coronavirus lockdown.

Number 10 said visitors and those returning from abroad would be allowed to leave isolation to shop for food and other essential supplies.

Travellers will also be able to board public transport from the port or airport to where they will quarantine, although they will be encouraged to use private vehicles.

The Prime Minister’s official spokesman confirmed on Tuesday that the Government is still looking at the prospect of “air bridges” between the UK and other countries, creating specific exemptions from the quarantine rules.

Reports suggest Boris Johnson is in favour of the plan.

There have been calls from senior Tories for the quarantine plan to be scrapped in favour of the so-called air bridge solution.

“I think the idea of air bridges are the right way forward,” he added.

“I think, as we’ve seen across the world, people are taking measures out of the lockdown and this targeted approach would be a much more sensible way to behave.”

George Morgan-Grenville, chief executive of tour operator Red Savannah, said: “By pursuing its quarantine plans without due regard for the economic consequences, the Government is choosing to ignore the devastation it will cause to companies, to employment and to the lives of all those whose jobs will be lost.

“The quarantine measures are a blunt weapon which will bring only economic disaster.”