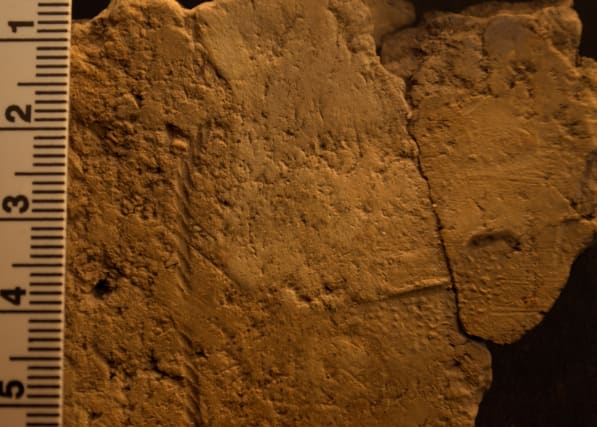 Archaeologists have found evidence of 5,000-year-old Neolithic textiles in Orkney, said to be only the second such find in Scotland.

The impression of the cloth was discovered on a fragment of pottery found at Ness of Brodgar, which is part of the Heart of Neolithic Orkney World Heritage Site.

Organic material from prehistory does not survive unless it is in very specific oxygen-free conditions, so the study of Neolithic textiles has to rely on secondary evidence, experts said.

The archaeologists at the site do not physically have a piece of 5,000-year-old fabric.

The latest discovery came during a project started in 2019 at the Archaeology Institute of the University of the Highlands and Islands (UHI).

It set out to closely examine impressions left on the surfaces of fragments, known as “sherds”, of grooved ware pottery unearthed at the Ness.

The project uses reflectance transformation imaging (RTI), a technique that uses a photographic rig to take multiple photos of a subject, each with a differently angled light source.

These pictures are combined, using computer software, to create a highly-detailed digital image of the surface of an object that can be examined from all angles, and examined on screen, with the results revealing surface details not visible during normal examination.

Analysis found the impression of cord cloth on two “co-joining” sherds of pottery.

The impressions appear on the inner face of the vessel, suggesting they were made by the potter’s clothing while the pot was being created.

Ness of Brodgar site director Nick Card said: “There is no evidence of textile tools available in Neolithic Orkney, suggesting textiles were made by hand, or using tools made with organic materials that have not survived in the archaeological record.

“This lack of material culture around textile production can help us to infer what techniques they may have been using.

“The project is also revealing rare basketry and other cord impressions.

“A growing number of base sherds from the Ness have impressions of coiled mats used in the construction of clay vessels. These match examples found at Barnhouse and Rinyo in Orkney and also at Forest Road in Aberdeenshire.

“All specimens suggest fibre mats of spiral construction that may have eased the turning of the pot as it was formed and even facilitated its transportation whilst it was dried and then fired.”

The impression of the cord was discovered by Lorraine Clay, one of the Ness post-excavation volunteers, and analysis using the RTI confirmed the identification.

The university said that within Neolithic Scotland textile finds are incredibly rare, with no other examples on Orkney.

It said that the one other documented example from mainland Scotland was found at Flint Howe, Dumfries and Galloway, which consisted of a small impression of a plain-weave textile on the exterior of a late neolithic/early bronze age vessel.