A father-of-eight who stole £30,000 worth of personal protective equipment (PPE) to sell on eBay at inflated prices has been jailed.

Gary Edwards, 40, from Wirral, Merseyside, was sentenced to 28 months in prison after he admitted stealing the equipment from his employer. 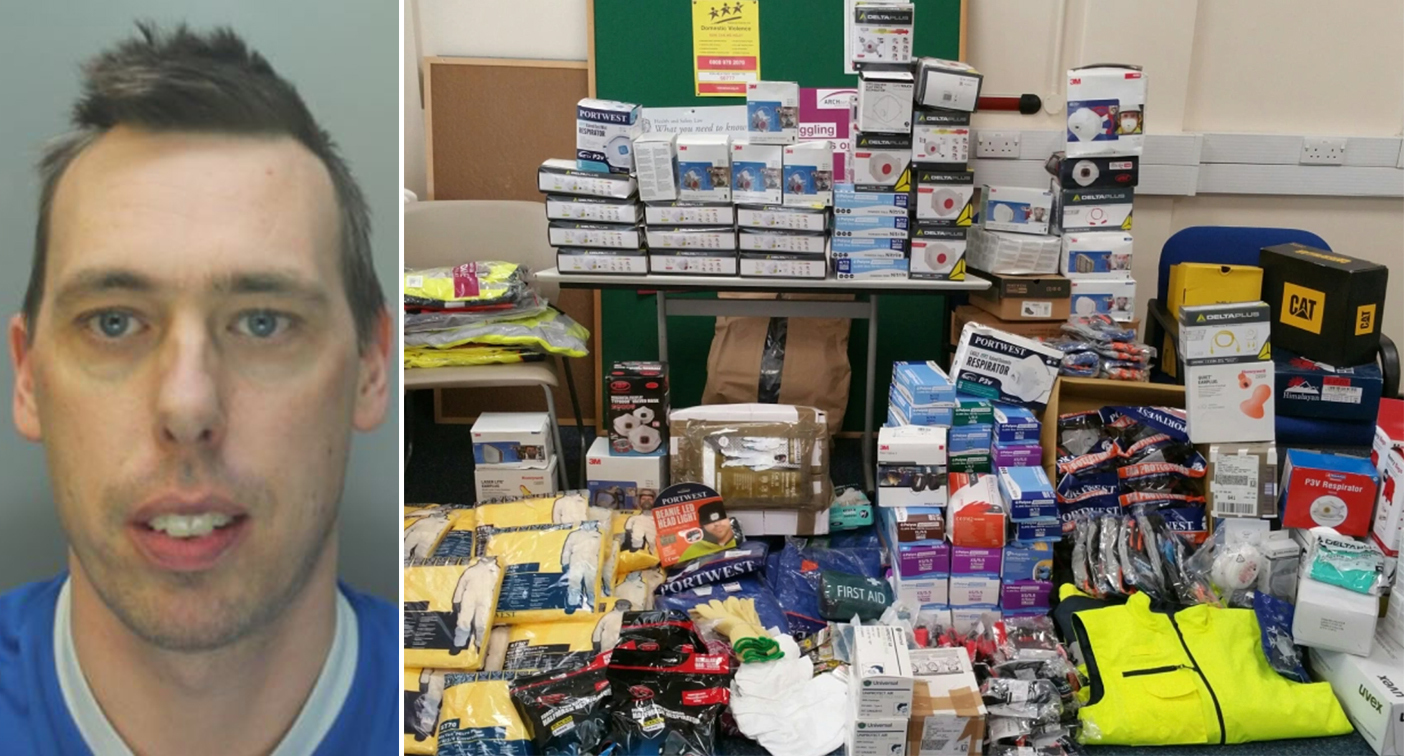 Liverpool Crown Court heard that his actions prevented the PPE from being donated to the NHS during a shortage of equipment as services sought to tackle the spread of coronavirus.

Edwards claimed he spent the proceeds from the sale of the stolen PPE on feeding his partner's seven children, but he also paid for a week-long VIP darts tournament package and redecorated his home, the court heard.

He was initially a delivery driver at Supa Safety, based at Croft Business Park in Bromborough, which supplied PPE to businesses, before becoming a sales representative and then unofficial office manager.

He pleaded guilty on Monday to theft by employee between June 2018 and 11 March this year.

His spree was only discovered during the coronavirus pandemic when the company planned to donate its suits to NHS workers.

The court heard Edwards had stolen 38 of these £6 suits but was selling them on eBay for £30 each.

The company has had to make redundancies and the owner has remortgaged her home to help save the business.

Judge Neil Flewitt told Edwards: "You were selling goods of this sort in March, when you knew they were badly required by the NHS and others treating the victims of this dreadful pandemic.

"Any decent person knowing the widespread suffering in our communities would have returned that stock or found some way of making it available to those who need it.

"It may be no exaggeration to say that the lack of that PPE may have lengthened the illnesses of some involved, it may have made others more vulnerable to catching this virus, and you must have been aware of that, and yet you continued selling or trying to sell it for your own financial gain."

Supa Safety was founded by Amanda Maitra in 2015 to supply PPE such as masks, gloves, coveralls, footwear, disposable uniforms and hi-vis jackets to pharmaceutical companies and construction firms.

He had responsibility for managing a £50,000 monthly order and the PPE stockroom of Bidston-based client Pharmapac.

In October 2018, Maitra launched a sister company, AM Industrial Supplies, in Wrexham, who took on this contract.

Pharmapac's monthly order fell to £25,000, but Edwards continued to order more stock, then sold the excess on eBay.

In December 2018, it was noticed items were missing and Edwards had concealed a purchase for ear muffs within an order.

But his employers couldn't be sure he was at fault until more stock disappeared and orders skyrocketed in January 2020, due to the spread of COVID-19.

Staff alerted Maitra to an eBay account, Safety Hands 18_8, selling similar stock, and she asked a friend to buy some gloves – Edwards' name appeared on the order.

When confronted, Edwards dropped it off with a punctured tyre and a small amount of stock inside, sent a message apologising, and paid £1,500 to the company.

It was then discovered he had set up a further eBay account and continued to try to sell stock stashed at his Bromborough home until his arrest on 1 May.

Hopkins told the court: "He confirmed the money was spent by him on what he describes as trips to professional darts tournaments around the country, decorating his home and feeding seven children."

Paul Davison, defending Edwards, said: "The majority of his offending took place before people had heard of COVID-19. That having been said, it's conceded by the defendant that when COVID-19 was very much in the public domain, he continued offering items for sale on eBay."

Davison said Edwards had taken on responsibility for his partner's seven children and also lived with his own daughter, 16.

He said: "The defendant is very remorseful for his actions. One may argue if he was so remorseful, why didn't he stop?

"The defendant felt he was so involved and embroiled perhaps there was no way out."