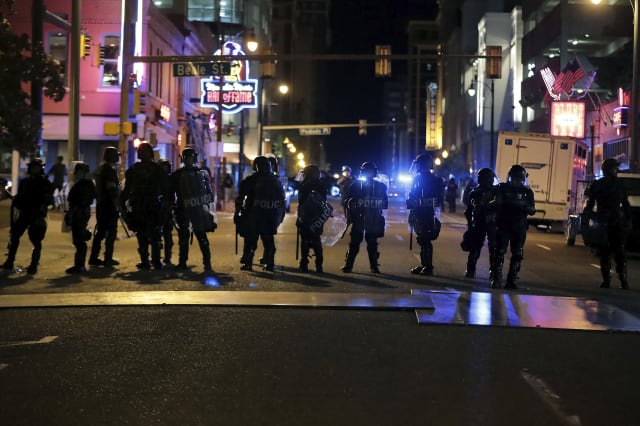 Downing Street has raised concerns about “very alarming” violence and the arrest of journalists covering the unrest sparked by the death of George Floyd.

Boris Johnson’s administration said people must be allowed to protest peacefully and reporters should be free to do their job.

Tens of thousands of people have taken to the streets across the USA but some protests were marred by violence in cities from Philadelphia to Los Angeles and close to the White House in Washington.

The protests – which have been echoed around the world including in the UK – were triggered by the death of George Floyd, a black man who pleaded for air as a police officer pressed a knee into his neck in Minneapolis.

“The violence we have seen in the US over recent days is clearly very alarming,” the Prime Minister’s official spokesman said.

“People must be allowed to protest peacefully. As the Foreign Secretary said yesterday, the footage of George Floyd’s death is deeply distressing and our thoughts are with all those who have been affected.”

The spokesman added that reported arrests and incidents of journalists being injured are “very concerning”.

“Journalists all around the world must be free to do their job and to hold authority to account without fear of arrest or violence.”

Derek Chauvin, the police officer who pressed his knee on to Mr Floyd’s neck has been charged with murder.

The Prime Minister’s spokesman said: “The suspect has been charged and there is a federal review under way. We would hope and expect justice to be done.”

The comments from Downing Street came as Star Wars actor John Boyega said he does not want to “work in fear” when he is in the US.

In a response to a Twitter user who said he should not comment on the incident as he is not an American, Boyega defended his right to speak out about racism in the US.

The Star Wars actor said that he has “family and friends there who could be any one of the victims of things that don’t change”.