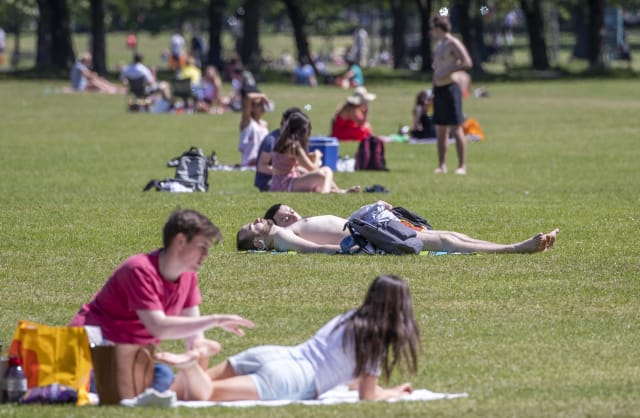 The first steps are being taken to ease the UK out of lockdown, since the Government introduced physical distancing guidelines and restrictions on activities such as non-essential travel.

Here are some of the changes that lockdown has brought:

Staying two metres apart from each other will still be key to keeping many people safe as the lockdown rules are eased.

Government chief scientific adviser Sir Patrick Vallance told a Downing Street press conference: “It’s not an absolute beyond two metres is safe and slightly less is not safe, there’s a graduation across that, and so roughly, at a metre, it’s somewhere between 10 and 30 times more risky than at two metres.”

Global carbon emissions from energy usage are expected to fall by almost 8% in 2020, in the biggest drop in history, according to the International Energy Agency (IEA).

It predicts a year-on-year reduction of around 2.6 billion tonnes of carbon dioxide from energy use including electricity, transport and heating, bringing emissions to levels they were 10 years ago.

The fall is down to predicted declines in coal, gas and oil this year and the impacts of subsequent recessions.

But the IEA warned that a rebound in emissions after the pandemic could be larger than the decline unless investment in restarting the economy goes towards cleaner and more resilient energy supplies.

The lockdown has shown community spirit in action, with simple acts like the Thursday Clap for our Carers, saying hello on the doorstep and social media groups bringing people together.

Twice as many people are chatting with their neighbours than this time last year, according to a survey commissioned for the Big Lunch neighbourhood project.

The nation has learned to love shopping locally as local producers, stores and businesses have kept calm and well-stocked amid a bleaker outlook for the high street.

Consumer intelligence company Springboard thinks there may be a retail spending spike – despite the rise in online shopping – from pent-up consumers when most non-essential retailers can reopen on June 15.

Diane Wehrle, Springboard’s insights director, says consumers “will be cautious and looking at reining in their spend due to ongoing financial uncertainty in many UK households”.

Fear of catching coronavirus on public transport has helped lead to a boom in cycling and walking, and 62% of people have noticed cleaner air during the pandemic.

A poll of 3,000 UK adults commissioned by environmental charity Hubbub also suggested 62% are in favour of boosting electric vehicle charging points, and 54% support extra funding for cycle lanes, with 77% thinking we should walk more.

The Government has made a series of announcements in recent weeks relating to funding boosts for sustainable transport.

These include £225 million towards temporary and permanent cycle lanes and reallocation of road space, £25 million to help people get bicycles repaired, and £2.5 million to provide 1,180 bicycle parking spaces at 30 railway stations.

With more time on our hands and the stresses of isolation to deal with, crafting has become a trend.

The UK Hand Knitting Association, which has launched the “Yarn Shop Love” campaign, says new services such as personal shopping on FaceTime and knitting tutorials on Zoom are being offered by stores facing a challenge to stay open. It says knitting and crochet can boost our mental health.

Cash is no longer king as people contemplate how many hands their banknotes have passed through. The contactless payment limit was raised from £30 to £45 to allow shoppers to make larger purchases without having to punch their pin into a potentially dirty keypad.

But this can spell difficulties for the elderly and those in the gig economy as banks shut their doors and ATMs are removed.

Some banks and cash machine operators made a 12-month pledge in April to help maintain the spread of free-to-use ATMs amid fears some could disappear as cash use plunged.

Thousands of planes have been grounded, while train and coach operators have suspended routes and there has been a major drop in use of buses.

The shutdown has also shown how technology has made a lot of business travel obsolete.

AA president Edmund King has suggested the use of roads and railways could be reduced after the crisis, telling the BBC that people travelling up and down motorways just to hold meetings is “inefficient, expensive and not good for the environment”.

Many of us have been able to hear birds singing from our open windows and balconies during lockdown in an uplifting sound of spring.

Veteran naturalist Sir David Attenborough has called for a new relationship that “respects rather than exploits the wonders of nature”.

Sir David, who is a vice-president of Fauna & Flora International, said in May: “As the world responds to this pandemic, we must be led by the science, and the science is telling us that the destruction of nature, and encroachment of humans and industry into natural habitats, is making the emergence of new and dangerous viruses ever more likely.”

Home networks have been under increased strain with more people working from home, children using online platforms for school work, and greater gaming and streaming as a source of entertainment.

Broadband providers have been holding up against a surge in demand, with download speeds only falling an average of 2%, analysis by Ofcom suggests.

The communications regulator measured broadband performance for 3,481 users at the beginning and end of March, to compare results before and after lockdown started.

Despite a spike in usage, data suggests the average download speed remained stable, dropping only 2%, although some networks suffered the effects of increased use more than others.