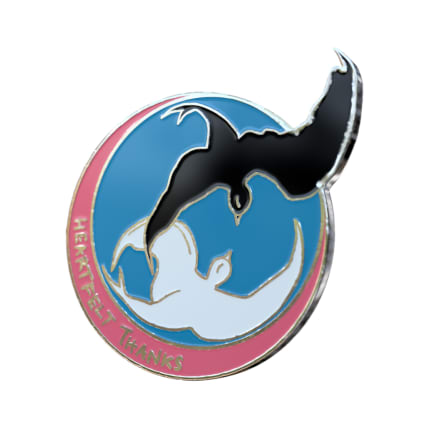 Special charity pins have been designed by celebrities as a small way for people to say “thank you” to someone who has helped them during the coronavirus crisis.

Actress Keira Knightley designed two flying birds swooping together into a near heart shape on her pin badge while former Beatle Sir Ringo Starr put a peace symbol inside a love heart in his design.

The words “heartfelt thanks” appear on the rim of each badge, which has been created for the #PinYourThanks project.

The £5 #PinYourThanks badges, which are launched on Tuesday, could be a little thank you for a postman, a carer, a neighbour who has picked up shopping or anyone who has helped during difficult times. All profits go to NHS Charities Together and Volunteering Matters.

Knightley said: “It feels very important to say “thank You” to all the NHS workers, carers and others, who have done and continue to do such an incredible job through this time of crisis”.

Comedian Joe Lycett drew a thumbs up image with the words “Cheers Bab” in rainbow colours while artist Ian Berry put a pair of clapping hands at the centre of his design.

A pair of hands that have been shaped into a love heart are on the original in-house designed pin badge.

Each gift giver can also leave a message for their personal hero after going online – at www.pinyourthanks.org – and making their order.

Some of the star names came on board after answering a call from two-time Oscar winning costume designer Jenny Beavan, who raided her contacts book to help pull the scheme together in just six weeks during lockdown.

Ms Beavan, 69, who is a co-founder and creative adviser, told the PA news agency: “The original idea around the designs was that it was all about hands, hearts and stars because the hands do the physical caring, the heart is there to give and receive and also because all these people are stars.

“What I love about all the badges is that I just think they are all little glowing pieces of art.”

She has won two Oscars, three Baftas and two Primetime Emmys. Her film work includes Mad Max, The Remains Of The Day, The King’s Speech and Sherlock Holmes. She has worked on countless films including, Emma, Sense And Sensibility, A Room With A View and Jane Eyre.

Working on the pin project has left her “very humbled” by the impact of Covid-19 and how people have come together to help each other.

She said: “All the people who have had help from volunteers were asking ‘how can we say thank you?’

“Saying thank you really does mean something and I always find I am curious when people do not say it. I think they are two of the most important words right now.”

Ms Beavan got involved in the project because it was “an absolute joy” to do something creative during lockdown but mainly because “I thought it was a terrifically good idea.”

She said: “I love being busy. I love the idea of doing something different and I am a costume designer in films which is a wonderful job but I have always felt it was a bit selfish in a way.

“This was something I could do which involved some of my skills in organising and knowing people but also to do something good. It was all generally very appealing.

“I got a pretty much 99% success rate with my contacts (who wanted to take part). I think they all just responded really well to the whole idea of being able to say thank you with something positive.”

Clive Little, co-founder of #PinYourThanks, said: “We wanted to create something that would allow people to show their personal and heartfelt appreciation to their local heroes, from helpful neighbours or supportive friends, to local community volunteers, care workers and NHS staff.

“We hope this special symbol of thanks will help spread the feeling of togetherness throughout the country and beyond, whilst raising funds for important Covid-19-related causes”.