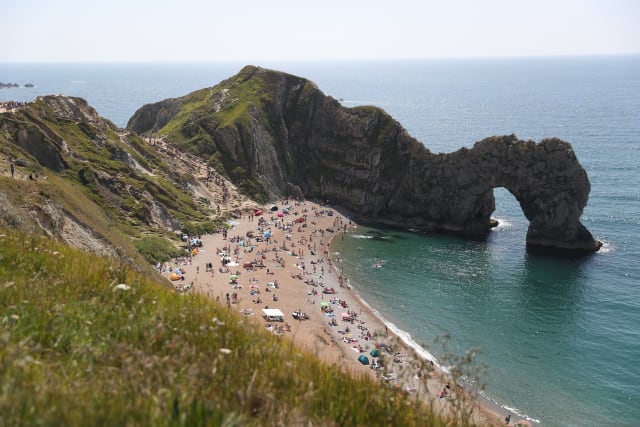 The owner of Durdle Door has said the easing of lockdown restrictions in England to allow for unlimited travel resulted in an "unacceptable influx of visitors" on beaches and beauty spots.

James Weld issued the statement following chaotic beach scenes at the Dorset site over the weekend, including three people suffering serious injuries after jumping off cliffs into the sea.

The three men were taken to hospital after leaping from the top of Durdle Door's limestone arch, which is 200ft high.

Thousands of people were evacuated from the beach and surrounding cliff area to allow air ambulances to land.

Mr Weld, who owns the Lulworth Estate on which Durdle Door is situated, said: "It is clear that the restriction on travelling should have been limited to local journeys only, which would not have resulted in the huge pressures being suddenly foisted on local road networks and on sites such as Lulworth Cove and Durdle Door.

"Unrestricted travel has undoubtedly led to the unacceptable influx of visitors, despite the enormously damaging effects of restrictions on the economy and on jobs."

He said Natural England and Dorset Council were responsible for the public right of access to the beaches and cliffs, with the Lulworth Estate having "no power or authority" to close them.

Mr Weld stressed that "everyone" had a right to access the estate's coastline and beaches under the Maritime and Coastal Access Act 2009.

The estate also had no means of preventing people from travelling to the estate following the easing of lockdown regulations on May 13.

Car parks on the estate were opened to "relieve pressure" on the local road network and community, following members of the public previously parking "wherever they could" in the village and at Lulworth Cove, Mr Weld said.

Earlier on Monday, the leader of Bournemouth, Christchurch and Poole Council wrote to local MPs and the chief constable of Dorset Police following the weekend's chaotic scenes.

Ms Slade said many of the visitors to the beaches were people who had travelled from outside of the county.

"Three weeks ago, following the Prime Minister's announcement that people could travel wherever they liked as long as they did not stay out overnight, we discussed the possibility of limiting travel distance," she said.

"We were told clearly that this was not possible.

"We saw the most awful scenes in Durdle Door with the arrival of two helicopters to deal with the stupidity of people jumping from the top of cliffs, cheered and clapped by thousands of beachgoers.

"We saw the kettling of people to give space to the helicopters and the closely packed paths as people were told to leave.

"We have seen crowds on our beaches, in large groups clearly not from the same household, we have had council officers spat at, abused and intimidated as they go about their work, and I am asking you all to go back to ministers in Westminster and ask them to put a travel restriction on England, as they have done in Wales and Scotland.

"In those devolved nations you can only travel five miles from home for reasons other than work or risk fines, and I am asking that a similar policy is brought in for England with immediate effect."

Leader of BCP Council, Cllr Vikki Slade, has formally written to the area's MPs and Chief Constable of Dorset Police to urgently call for stricter travel rules after witnessing scenes of irresponsible behaviour at beaches this weekend. Read the letter ➡️ https://t.co/Kc3gKX4BQB

But on Sunday, scores of people came to the beach and so-called tombstoners could even be seen jumping from the arch.