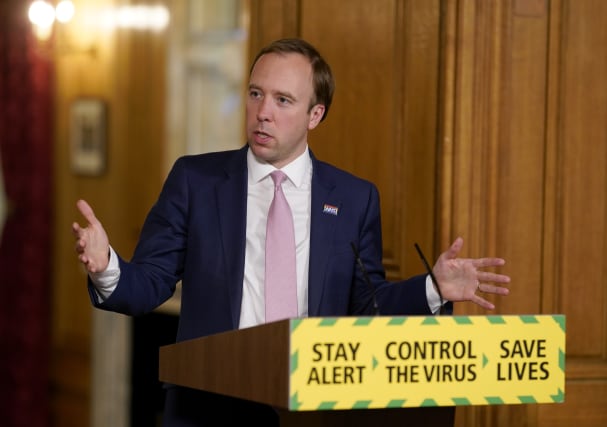 Health Secretary Matt Hancock has defended the Government’s test and trace system, as thousands of young children in England returned to primary school.

Mr Hancock said the contact-tracing system was “up and running” and was “successful” following reports of problems with technology and staff saying they were being paid up to £27.75 per hour for doing nothing.

It comes as thousands of primary school children in Reception and Years 1 and 6 returned to school, though indications suggest the number of pupils back in the classroom varies significantly depending on the region.

Asked during the daily press briefing why some contact tracers have no work to do, Mr Hancock said 25,000 had been hired and it was a good thing there were so many.

He said: “It’s successful, I’m very glad to report that those who are asked to isolate by the contact tracers are expressing the willingness to do so and we track that very carefully.

“The level of incidence of disease has come down and so actually we have more capacity than we need, this is a good thing.

“I think to err on the side of having too many contact tracers is the right side to err on. I’d rather have too many people trained and ready to go.”

Professor John Newton, the Government’s testing coordinator, said the system was working well, adding: “We do have a lot of capacity.”

But one nurse working as a contact tracer told the PA news agency the necessary systems were “not in place”.

At the press briefing, Mr Hancock pointed to a range of measures available to combat local flare-ups of coronavirus, which could include “shutting to new admissions a hospital A&E if there was an outbreak in that hospital”.

Local directors of public health would work with regional Public Health England and NHS teams “to make sure we got the response right”, he added.

However, Mr Hancock said lockdown measures could be reimposed nationally if necessary if the number of Covid-19 cases takes off again.

“We are attempting to move the system from these national, blanket measures to a more targeted approach – this is why test and trace is such an important part of that,” he said.

“But we have always said that we are prepared to reintroduce measures – whether that is nationally or in response to a localised outbreak – if that is necessary.”

Mr Hancock said the new Joint Biosecurity Centre would have a national role “to provide the advice and the information that would then be acted on locally” but admitted it was not yet fully operational.

“We are getting it stood up, making sure that all the information flows come to it so it is able to analyse them and to make sure that it gets set up correctly,” he said.

“All that work is being done as we speak.”

However, the proportion of schools reopening to more pupils this week is a mixed picture across England – with some local authorities reporting no schools would admit more children on Monday.

A survey of councils by the PA news agency has found dozens of local authorities across England, predominantly in the North, were advising against a return to school on Monday amid safety concerns.

Business Secretary Alok Sharma said on Monday he understood parents’ concerns over sending their children back to class, but insisted the Government had taken steps to ensure schools are safe to return to.

The general secretary of the Association of School and College Leaders, Geoff Barton, said head teachers were reporting attendance rates of between 40-60% of eligible pupils, as parents kept children at home.

Downing Street said it expected the majority of primary schools in England to open to more children this week, with the Prime Minister’s official spokesman insisting: “We have only taken this step because we believe it is safe to do so.”

Wales has not set a date for schools fully reopening, while in Scotland and Northern Ireland pupils will be going back in limited return from August.

– The easing of the lockdown came despite the alert level remaining at four – which the Government previously said would mean restrictions remaining in place.

– Wales’ First Minister Mark Drakeford said he would not rule out “precise, localised” restrictions on the public if a new contact-tracing system showed spikes of transmissions.

– More than 200 travel and hospitality businesses have joined a campaign urging the Government to overturn its planned 14-day quarantine for arrivals into the UK.

– Police issued almost 800 dispersal notices on Saturday for lockdown breaches in Scotland, Nicola Sturgeon said, as she warned new laws will be passed if the public continues to contravene the rules.

– In England, directors of public health warned they are “increasingly concerned” the Government is making the wrong judgment by easing lockdown restrictions far too quickly.

– Dental leaders in England expressed further concern about the opening of dental practices from next Monday, saying a lack of personal protective equipment (PPE) could mean many remain shut.

New guidance issued to police forces across England said police can tell people to leave someone’s home if they are breaching new lockdown rules but cannot make them go.

Gatherings of up to six people can now take place outdoors, for example in open spaces or in private gardens.

But laws which came into force on Monday banned people from staying overnight anywhere other than the place where they are living.

Any indoor gatherings of two or more people are also prohibited unless they are members of the same household or fall under a short list of exceptions to the rule.

A document from the National Police Chiefs’ Council (NPCC) and College of Policing said any officer finding somebody staying overnight somewhere can “only direct a person to return home” but there are no powers to remove somebody or use force.