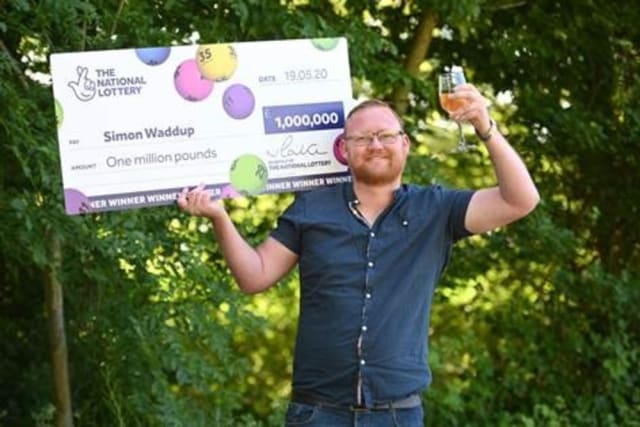 An electrician has landed a £1,000,000 lottery pay-out – after buying his first ever EuroMillions tickets because a voice in his head told him to.

Simon Waddup, from Coventry, said the UK Millionaire Maker win will enable him to fulfil his dream of assembling a property portfolio.

The 31-year-old, who bought two £2.50 lucky dip tickets for the draw on May 19, said: "For as long as I can remember I have wanted to buy old properties, do them up and build my own portfolio.

"Friends and family laughed at my dream, especially when I was a teenager, but I was so focused, always thinking about how I would do it.

"Both I and they now can't believe that I have got that amazing windfall that will enable me to now go after my dream."

Mr Waddup, who has been unable to work since last summer due to health problems, said he was taken by an urge to buy a ticket after hearing a voice in his head, that told him his luck was about to change.

"I have played Instant Win Games on the National Lottery website, but never a main draw game," he said.

"I was shopping in Aldi and I kept hearing this voice telling me to buy a lottery ticket.

"When I got back, I looked at my National Lottery account online and I had £5 left in my wallet. I didn't even know what day it was, or what type of draw was available next, but saw I could buy a EuroMillions Lucky Dip for £2.50, so decided to buy two for that night's draw."

Describing the moment he was notified of the win, he added: "I was then in a bit of a daze, just shaking.

"The first person I told was my 10-year-old daughter and she asked if she could now have a passport, seeing as she has never been abroad.

"I will definitely be treating my family. I will also get a passport for my daughter and, when we can, take a trip abroad – she has already told me that she wants to go to Spain.

"I still can't believe this was the first time I played a main draw game. Lady Luck must have been smiling down on me and said: 'You need this now.'"