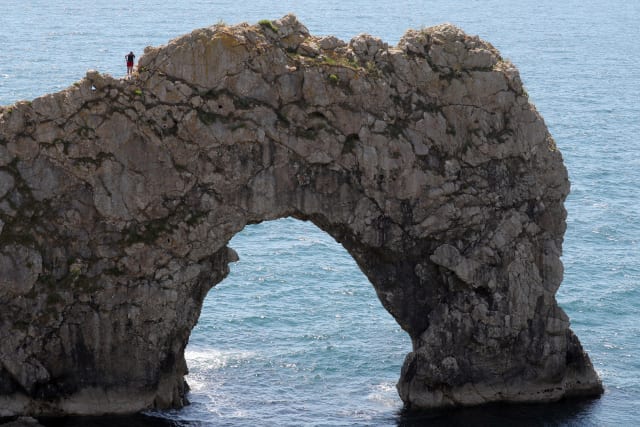 A council leader has called for stricter travel rules following the weekend’s chaotic beach scenes in Dorset which saw three people seriously injured after jumping off cliffs into the sea.

Councillor Vikki Slade, the leader of Bournemouth, Christchurch and Poole Council, has written to local MPs and the chief constable of Dorset Police after widespread scenes of irresponsible behaviour witnessed across the area’s beaches, including at the limestone arch of Durdle Door.

She said she had witnessed first-hand incidents of people failing to adhere to social distancing rules, illegal parking, widespread barbecues and staff facing abuse when going about their work.

Ms Slade said many of the visitors to the beaches were people who had travelled from outside of the county.

“Three weeks ago, following the Prime Minister’s announcement that people could travel wherever they liked as long as they did not stay out overnight, we discussed the possibility of limiting travel distance,” she said.

“We were told clearly that this was not possible.

“We have asked the police for extra support in enforcing social distancing and we have been told that we are policed by consent and that this is not practical, and that the capacity of the police makes it impossible to achieve.

“We have even been asked to stop councillors and residents from calling the police when they have concerns about gatherings, groups and breaches.

“We saw the most awful scenes in Durdle Door with the arrival of two helicopters to deal with the stupidity of people jumping from the top of cliffs, cheered and clapped by thousands of beachgoers.

“We saw the kettling of people to give space to the helicopters and the closely packed paths as people were told to leave.

“We have seen crowds on our beaches, in large groups clearly not from the same household, we have had council officers spat at, abused and intimidated as they go about their work, and I am asking you all to go back to ministers in Westminster and ask them to put a travel restriction on England, as they have done in Wales and Scotland.

“In those devolved nations you can only travel five miles from home for reasons other than work or risk fines, and I am asking that a similar policy is brought in for England with immediate effect.”

After the three men were seriously injured in Saturday’s incident after jumping from the top of the Durdle Door arch, the popular beauty spot and nearby Lulworth Cove were closed.

However on Sunday, scores of people defied attempts to close the beach and so-called tombstoners could even be seen jumping from the 200ft high sea arch.

Meanwhile, a paddleboarder who saved a man who had jumped into the sea said he thought he was going to drown in the rescue.

Mike Wiley, 31, from Southampton, found the man unconscious on the seabed after he had tombstoned from Durdle Door arch.

“He hit the water so hard he didn’t even come up to the surface, he went straight down,” Mr Wiley told the BBC.

“When I got to him he was just laid on some seaweed and I grabbed his hand and kept swimming to the surface.