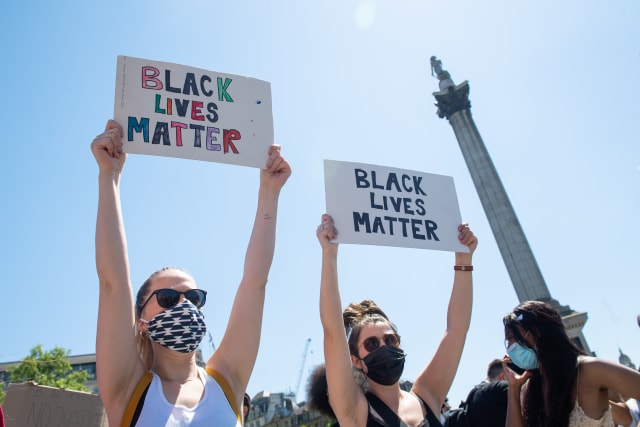 Thousands of people have marched across London to protest against the death of a black man restrained by police in America.

The Black Lives Matter demonstration on Sunday was organised after George Floyd died when a white officer held him down by pressing a knee into his neck last Monday in Minneapolis.

The protest started in Trafalgar Square around lunch time, where people chanted Mr Floyd’s name and knelt on the floor en masse, before heading to the US embassy in Battersea.

Five people were arrested at the Nine Elms site, the Metropolitan Police said, including three for coronavirus breaches and two for assault on police officers.

Those detained were all between 17 and 25, Scotland Yard said.

One demonstrator said the protests were “very important because it is sending a clear message that we have had enough racial injustice in our country”.

Isabelle Orsini, 20, is originally from New York, but now lives in Kensington. She told the PA news agency:”The US obviously has a much deeper and darker history of black discrimination compared to the UK.

“The reason people are so angry is because this is reopening wounds that go back hundreds of years.

“It is very important that we do whatever it takes to tell our government that racism will not be tolerated.”

After Battersea, protesters – many wearing masks – crossed the river again, and headed through affluent Chelsea, Knightsbridge and Notting Hill, before gathering at the base of Grenfell Tower where 72 people died in a 2017 fire.

A reverend at a church on Trafalgar Square, where the protest started, said she was “very sympathetic” towards those marching but expressed some concern about how close they were.

Reverend Sally Hitchiner, associate vicar at St Martin-in-the-Fields, told PA: “It’s showing there are people in the UK who care passionately about the situation in the US.

“Clearly they’re not following lockdown and social distancing, but I think there’s a huge amount of passion there and that’s overriding their concerns.

“It’s an issue that requires passion but at the same time there’s a huge amount of risk in what they’re doing.”

The London demonstration comes after tens of thousands of people joined nightly protests across the US since the death, with at least 1,600 people arrested in 22 cities as some demonstrations descended into violence.