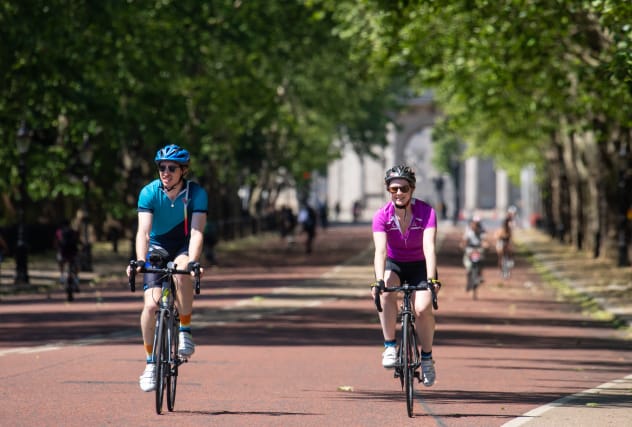 A Government health expert has told people to limit themselves to what is “sensible” rather than “possible”, ahead of lockdown restrictions being eased in England.

At the daily Downing Street Covid-19 press conference, deputy chief medical officer Dr Jenny Harries warned people to use common sense as restrictions are lifted, allowing groups of up six people to meet outside if they practise social distancing.

Dr Harries said now is a “critical time” and urged people to ensure they did not contribute to a resurgence of the virus.

She added: “I think it’s really important that people just try to use these measures sensibly for their own benefit, but don’t risk transmission to other people.”

He said: “We’re reasonably confident that the steps we’ve taken, and will be taking on Monday, are manageable.”

Referring to the R rate, or infection rate, of coronavirus, Mr Jenrick said: “We have to all continue to play our part in that, because the rate of infection remains somewhere between 0.7 and 0.9 and the room for manoeuvre is quite limited.”

The comments came as the Department of Health said 38,489 people had died in hospitals, care homes and the wider community after testing positive for coronavirus in the UK, as of 5pm on Saturday, up by 113 from 38,376 the day before.

Speaking about new guidelines to allow 2.2 million people classed as “vulnerable”to have more social interaction, the minister added: “We’ll obviously keep this under very close scrutiny as we move into this next phase and as we approach the next decision point on June 15.”

“Far from it. What we’re saying to the people who have been shielding for the last 10 weeks is that we think that the rate of infection is sufficiently low now to enable you to do some quite modest things, like going outside for a walk with members of your household, or like, if you’ve been living alone, meeting somebody from another household.”

Meanwhile, daily coronavirus testing capacity reached 200,000 on Saturday, including capacity for 40,000 antibody tests a day, meeting Prime Minister Boris Johnson’s target of reaching the milestone by the end of May.

The Department of Health said the capacity was reached through diagnostic tests, with capacity currently at more than 112,000, antibody testing and surveillance testing, which was launched to determine how the virus moved through the population.

Mr Jenrick also repeated Foreign Secretary Dominic Raab’s message that England was “transitioning” from level four to level three on the Covid Alert Levels system, which measures the threat level of coronavirus in the UK.

According to the system, gradual easing of restrictions is supposed to take place at level three, but Mr Raab said it was possible because the Government’s five tests to change measures have been met.

He added: “We can’t just stay in lockdown forever. We have got to transition.”

Asked whether the lockdown will be tightened again if infection rates increase, Mr Raab told Sky News’ Ridge on Sunday: “We will target, if there is any uptick, and it could be in a locality, it could be in a particular setting, we will target very carefully measures that would apply to it so that we can take these steps but also keep control of the virus.”

Mr Raab told BBC One’s The Andrew Marr Show the easing of the lockown was needed.

He said: “The reason we can take the steps is that we have met our five tests. We have made progress.

“Because we have made that progress, steadily, slowly, surely, week in, week out, we can very gradually, very carefully, take the steps that we are taking tomorrow.”

More than two million clinically extremely vulnerable people who have been shielding since March will finally be allowed to spend time with other people outdoors.

But the new freedoms, which will come into effect officially after a hot weekend which has enticed people to beaches and beauty spots, must be treated with caution, Dr Harries insisted.

Dr Harries’ comments echo a warning from fellow deputy chief medical officer Professor Jonathan Van-Tam, who said at Saturday’s briefing the Government and public had a “dual responsibility” to prevent a second wave of the virus.

He said: “Don’t tear the pants out of it, and don’t go further than the guidance actually says.”

Writing in The Sunday Telegraph, the Government’s chief scientific adviser Sir Patrick Vallance said ministers had to take “many other factors into consideration” in making decisions, and that Scientific Advisory Group for Emergencies (Sage) advice was “independent of politics”.

From Monday in England, friends and family can meet in parks and gardens in socially distanced groups of six.

For those who have been shielding, a slight reprieve will come in the form of being able to go outside with members of their household while continuing to follow social distancing guidelines.

Those in this category who live alone can meet outside with one other person from another household.

The easing of restrictions for those shielding follows criticism that this group had been left feeling “forgotten”.

Phil Anderson, head of policy at the MS Society, said people would want to hear the scientific evidence behind the decision, which he described as having “come out of the blue”.

Meanwhile The Observer reported that a letter sent by 26 senior UK academics and health administrators to Downing Street complained about the impact of Dominic Cummings’ actions in driving from London to Durham with his wife and child during the lockdown.

The group also warned about a failure to enact an effective test, trace and isolate system to pinpoint and then quarantine newly infected people.

As a result, they are now “very concerned for the safety and wellbeing of the general public” as the lockdown measures are relaxed, the newspaper reported.

A poll for the newspaper by Opinium found support for the Conservatives had fallen, to leave them just four points ahead of Labour, and the paper said the Tory lead has fallen by eight points in the past week alone.