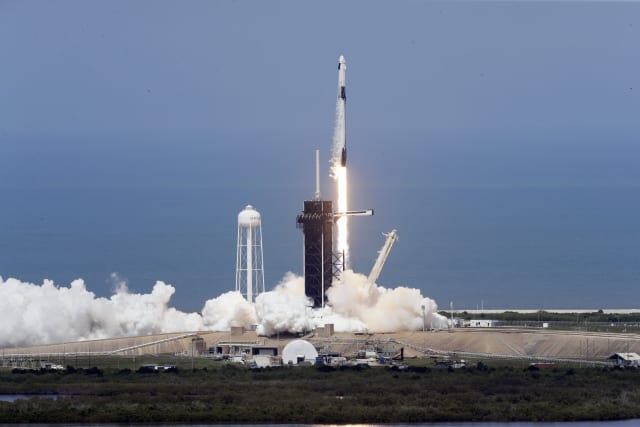 SpaceX has made history by becoming the first private company to send humans into orbit, ushering in a new era for commercial space travel.

US astronauts Robert Behnken and Douglas Hurley are on their way to the International Space Station (ISS) on a rocket and capsule system built by billionaire entrepreneur Elon Musk’s firm.

The Falcon 9 took off on Saturday at 8.22pm UK time from the Launch Complex 39A at Cape Canaveral in Florida, carrying the Crew Dragon spacecraft where the astronauts were strapped in.

Shortly after lift-off, the Falcon 9 rocket separated into what is called a first stage and a second stage.

The first stage landed safely on a SpaceX droneship called Of Course I Still Love You stationed in the Atlantic Ocean off the coast of Florida, while the second part of the rocket continued the journey with the Dragon capsule for a few more minutes before separating from the spacecraft.

Moments after the Dragon capsule made it into orbit the crew were given a message from the team on the ground.

The Falcon 9’s chief engineer said: “On behalf of the entire launch team, thanks for flying with Falcon 9 today. We hope you enjoyed the ride and wish you a great mission.”

One of the crew replied: “Congratulations to you and the F9 team for the first human ride for Falcon 9 and it was incredible.

“Appreciate all the hard work and thanks for the great ride to space.”

British astronaut Tim Peake tweeted his congratulations to the astronauts, saying: “What a great launch and congratulations @SpaceX on making history. I loved watching the acceleration during the final minutes of launch – it’s a crazy, crazy feeling being hurled up to 27000kmh!”

It will take Mr Behnken, 49, and Mr Hurley, 53, around 19 hours to reach the space station, where they will join the three other residents – Nasa’s Chris Cassidy and Russia’s Anatoli Ivanishin and Ivan Vagner.

Travelling at the speed of around 17,000mph, the Dragon will continue to raise its orbit until it is ready to rendezvous and dock with the space station on Sunday at 3.30pm UK time.

The pair were due to travel on Wednesday but the mission was aborted less than 17 minutes before launch over concerns that the event could trigger lightning.

According to Nasa, the aim of the mission is to show SpaceX’s ability to ferry astronauts to the space station and back safely.

The mission is expected to last anything between one and four months, with a number of tests being performed on the Crew Dragon.