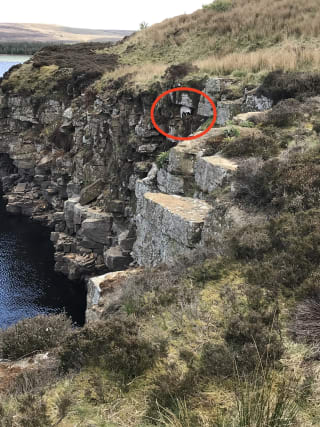 Rescuers abseiled down a cliff to retrieve a lamb which was stranded on a ledge.

The RSPCA was called after members of the public heard the lamb “crying for mum” as he stood trapped above a 20ft drop at the end of its field in Dunford Bridge near Sheffield earlier in May.

RSPCA inspector Sara Jordan said: “The sheep’s field sloped down to the rocky cliff and mum was waiting nearby.

“The cliff was jagged with rocks and dropped around 20ft down to water below so the lamb was in a really perilous position and couldn’t have got back up to the field on his own.”

Ms Jordan enlisted the help of South Yorkshire Fire and Rescue Service’s rope team, and they were able to abseil the short distance down from the top of the cliff.

They winched the lamb back up and reunited him with his mother.

Ms Jordan added: “I checked him over and thankfully he wasn’t injured from his fall. He was very, very lucky.

“It was lovely to see him toddling off across the grass with his mum.”