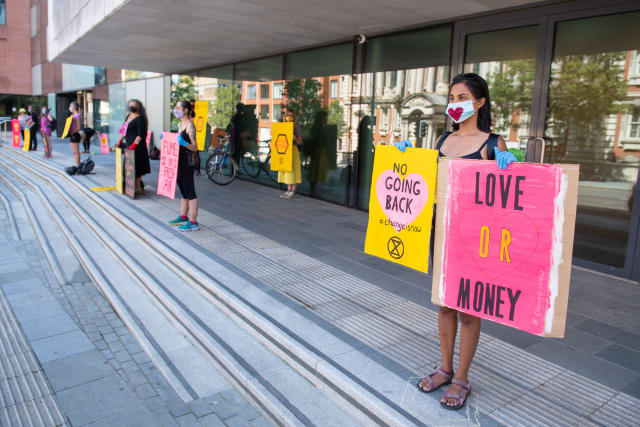 Several environmental protesters have been arrested during demonstrations demanding the Government take action to tackle climate change as lockdown restrictions are eased.

Metropolitan Police officers said “a small number” of Extinction Rebellion demonstrators were arrested for breaching Covid-19 regulations during their silent protests at Parliament Square and Hyde Park in Westminster.

Activists wearing face masks and brandishing signs reading “change now” and “fumes or fresh air” also gathered at the Woolwich Centre to demand action from the local Greenwich Council which meets there.

The protesters called on people in the UK to “publicly express their dissatisfaction with Government incompetence and demand a Citizens’ Assembly on the Covid-19 recovery”.

One activist, who gave her name as Sarah, said: “We’re here today because over the last couple of months, the crisis that’s happened with Covid-19 has shown us what we can really do to face an emergency, and what our governments can do when they are motivated.

“We’re asking to build on some of the positive changes which have happened over the last couple of months: the drop in pollution, people cycling and walking more, people getting outside.”

She added: “We don’t want to go back to the toxicity we had before – we want to move on to something cleaner, greener and more sustainable.

“We are hoping this will start a conversation and have people thinking about what they want to happen as we come out of lockdown.”

The Met Police said: “A small number of arrests have been made for breach of Covid-19 regulations and some FPNs (Fixed Penalty Notices) issued.

“Officers are engaging with those present and encouraging them to go home.

“The majority of individuals have dispersed.”

The police force said it could not give precise numbers of those arrested, and no charges have yet been made.