Crowds flock to beaches and train stations ahead of lockdown easing 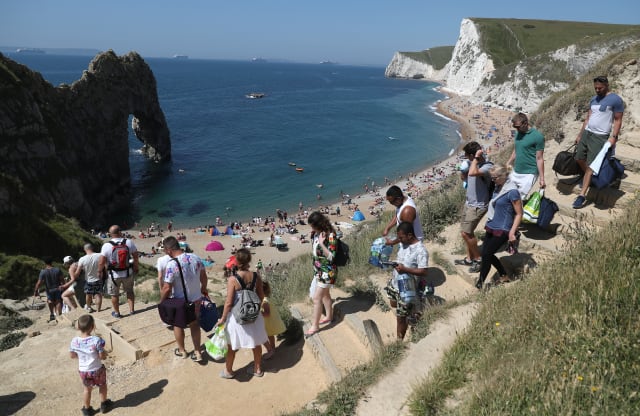 Weekend revellers have flocked to beaches and train stations to enjoy the sunny weather ahead of lockdown restrictions being eased on Monday.

Hundreds swarmed to popular beaches, and the National Union of Rail, Maritime and Transport Workers (RMT) complained that “mixed messages” from the Government has caused travel chaos.

Temperatures have soared well above the average for the time of year, with clear skies and highs of 28C on Saturday, according to the Met Office.

Many people enjoyed the sunny weather on the coast by Durdle Door, near Lulworth in Dorset, despite police forces urging the public to “think twice” before travelling to crowded spots.

Dorset Police said on Friday: “Relaxation of lockdown legislation, coupled with warm and sunny weather, has seen a huge rise in the number of people travelling into Dorset to spend time at beauty spots, nature reserves and coastline.

“As the country continues to fight Covid-19 and keep the R rate (an infection measure) down, the public is being asked to take responsibility for their actions and do the right thing to avoid spreading the virus and reduce the impact on local communities.”

Similar scenes were also spotted at Bournemouth Beach, nearby Bournemouth train station, which RMT union leaders described as “the eye of the storm”.

RMT general secretary Mick Cash said: “The hopeless mixed messaging from the Government and the impact of the (Dominic) Cummings affair has resulted in predictable chaos on the railway today, with Bournemouth at the eye of the storm.

“This is on Boris Johnson and he cannot shirk responsibility.

“RMT has warned that lifting the lockdown too quickly would soon result in chaos on our transport services, and here you have it.

“This union will take whatever action is required to protect the health, safety and livelihoods of our members.”