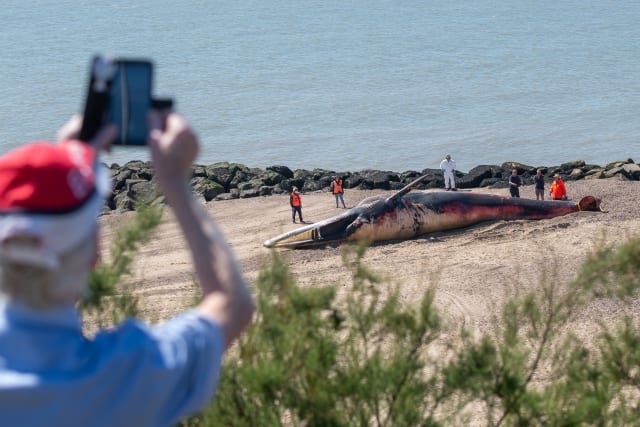 Work is ongoing to remove the carcass of a 40ft whale that washed up on an Essex beach.

The giant marine mammal was swept ashore at Clacton-on-Sea on Friday.

Pictures from the scene show people watching on as the carcass of the animal, believed to be a fin whale, is removed from the stretch of sand at Holland-on-Sea.

The fin whale is the second-largest mammal in the world after the blue whale, and the British Divers Marine Life Rescue charity said the creature was “actually rather small for this species”, and “therefore this animal is a juvenile”.

Tendring District Council said it expected the whale to be removed by the end of the day, but asked people to keep their distance if going to the beach.

The authority said in a Facebook post on Friday: “We would ask all beach-goers to respect the cordon while the clearance work is carried out.

“We understand people may be interested and want to see the whale for themselves or watch the clearance work – we would remind people to observe social distancing and to avoid crowded areas as we are still in the Covid-19 pandemic.”

On Friday, Essex Police wrote in a Facebook post: “Sadly a 40ft whale has been washed up on Clacton this morning.

“We are currently in attendance with other organisations and discussions are under way on how to remove her.

“The area is cordoned off and the public are advised to stay away.”