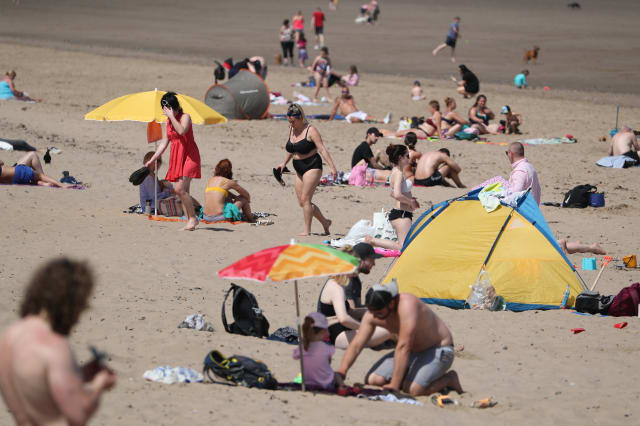 The UK has recorded the sunniest spring since records began in 1929, the Met Office has said.

It is also set to be the driest May for 124 years, with official figures on rainfall to be published on Monday.

The Met Office recorded more than 573 hours of sunshine this spring so far between March 1 and May 27, beating the previous record of 555.3 hours in 1948.

The sunny weather is set to continue until the end of the month, with temperatures forecast to reach highs of 25C in some parts of the UK this weekend.

With the public allowed to spend time outdoors for reasons other than exercise during the lockdown from May 13, many have flocked to the beach and parks to bask in the sunshine.

This month has also seen little rainfall, with Northamptonshire – the driest county so far – recording only 1.5mm of rain during May.

As a result, many farmers have seen some cereal crops already suffering from the dry spell.

The National Farmers’ Union (NFU) said: “Continued low rainfall and high temperatures into the summer will result in more widespread impacts for agriculture and the environment.”

It continued: “The situation is becoming increasingly serious for the growth of rain-fed grass and cereal crops across the country, made worse by the wet winter that led to the planting of more spring crops which are now struggling because of falling soil moisture levels.”

It comes after the Met Office recorded the wettest February on record, as heavy rainfall from Storms Ciara, Dennis and Jorge caused flooding in many parts of England and Wales.

Dr Mark McCarthy, from the Met Office’s national climate information centre, said: “Spring 2020 has been very dry, and May in parts of England has been exceptionally dry.

Despite the drier conditions, there are no plans for hosepipe bans, with the Environment Agency (EA) stating on Thursday that most water companies have “appropriate” water reserves.

An EA spokesman said: “We work closely with all water companies throughout the year to ensure their drought plans are up to date and activated as needed.”

The Met Office said there have been only nine UK springs recording more than 500 hours of sunshine since records began.