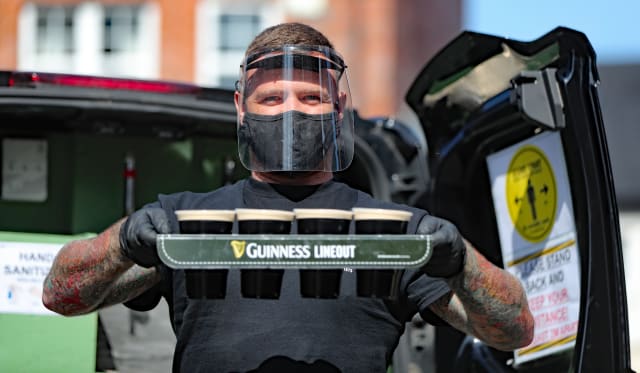 A service delivering pints of beer to customers at home in Belfast is set to recommence, a court has heard.

The Hatfield House bar in south Belfast launched the service in April, delivering pints of Guinness to customers in their homes as the coronavirus lockdown saw licensed premises close their doors.

However the bar was forced to suspend the initiative after being challenged by police over potential breaches of the licensing order on April 18.

The bar took a legal challenge against the Police Service of Northern Ireland (PSNI) over the matter.

The Royal Courts of Justice in Belfast heard on Friday that progress has been made amid ongoing discussions between the pub and PSNI.

David Scoffield QC, for Hatfield House, told the court: “I am happy to say that that has culminated in a letter which was sent on behalf of the respondent over lunchtime which sets out some of the detail of some of the matters that have been discussed and invites my client to confirm a number of issues, most of which have been confirmed already in discussions, which we anticipate there won’t be any difficulty with.

“Once that confirmation has been received, we’re told that the PSNI will have no objection to a draft beer delivery service being commenced.

“That exchange of correspondence, we expect, should conclude shortly, certainly sometime this afternoon. I think both parties are agreed there is therefore no need for the court to determine an interim relief application because the police objection to the service commencing will have been removed on the basis of the detailed matters that have been discussed and agreed between the parties.

“The key message for today is that there is correspondence in train, which means that is looks likely the service will be able to recommence without police objection in light of the helpful discussions that there have been between the parties.”

He added the issue of costs “remains a live issue between the parties”.

Mr Justice McAlinden said his “main priority is to ensure that there is an element of transparency and an element of clarity in relation to the legal aspects of this case”, referring to the future potential for similar applications in similar circumstances in the future.

Another hearing will take place next Friday to review progress and potential final disposal.

Following the court proceedings, the Hatfield Bar posted a message on its Facebook page announcing “pints are unpaused”.

It said: “The pint man is back and ready to deliver freshly poured pints of Guinness directly to your door.”

He said: “It is important to highlight that this is a very complex matter as any such service needs to satisfy a number of legislative requirements in addition to the Health Protection (Coronavirus, Restrictions) Regulations (Northern Ireland) 2020, including, in particular, the Licensing (Northern Ireland) Order 1996; the Sale of Goods Act 1979, Health and Safety and Road Traffic legislation.

“The PSNI has engaged in ongoing discussions with the licensee and their legal representatives in relation to this facility.

“PSNI are now satisfied that with the development and implementation of changes in the service and appropriate undertakings in respect of insurance and health and safety legislation and bespoke terms and conditions of sale, this service could comply with the applicable legislation.

“While PSNI and our licensing officers across Northern Ireland are happy to work with any licensees considering introducing a similar service, we would advise them to ensure that any such proposed service meets all current legislative requirements and they have the correct licence in place.”