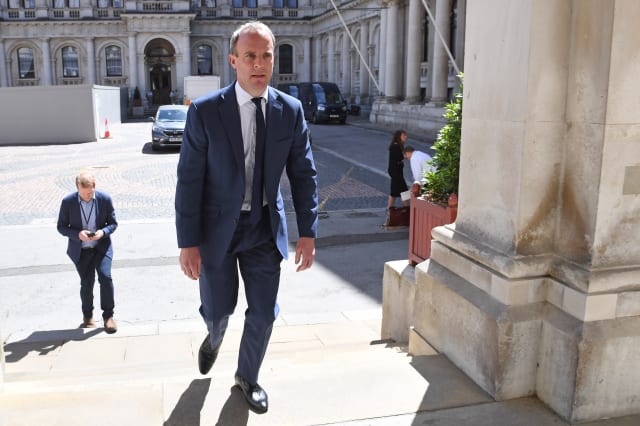 Up to three million people registered as a British national (overseas) in Hong Kong could be eligible for UK citizenship if China presses ahead with plans to gain more control over the former colony.

Foreign Secretary Dominic Raab has said he would facilitate a path to British citizenship for BN(O) passport holders in the territory – some 349,881 people – if Beijing does not suspend its plans.

On Thursday he announced that he would “set in train” arrangements enabling passport holders to come to the UK for longer than the current six-month period and apply for extendable periods of 12 months to work and study – providing a “pathway to citizenship”.

The Home Office has now confirmed that all BN(O)s – who would have been issued with BN(O) passports previously – can renew the documents, meaning they would be eligible for the extended visa rights.

The Government estimates there are around 2.9 million BN(O)s currently in Hong Kong.

Foreign ministry spokesman Zhao Lijian said all BN(O) passport holders are “Chinese nationals and if the UK insists on changing this practice it will not only violate its own stance but also international law”, according to the BBC.

Downing Street said the Government hopes China will “listen carefully” to its warnings over China’s moves.

The Prime Minister’s spokesman told a Westminster briefing on Friday: “We have urged China to reconsider the implementation of this law and live up to its responsibilities as a leading member of the international community.

“We hope they will listen carefully to the arguments we have made in public and in private about the impact which Beijing’s proposal would have on Hong Kong’s stability and prosperity.”

Foreign ministers from the UK, Australia, Canada and the US have urged China to work with the government of Hong Kong to find a “mutually acceptable accommodation that will honour China’s international obligations” under the Joint Declaration.

China’s ceremonial legislature, the National People’s Congress, endorsed a security law for Hong Kong earlier this week that has strained relations with the UK and the US.

The law will alter the territory’s mini-constitution, or Basic Law, to require its government to enforce measures to be decided later by Chinese leaders.

The move by China prompted Washington to announce that it will no longer treat Hong Kong as autonomous from Beijing.

Activists in Hong Kong have complained that the law will undermine civil liberties and might be used to suppress political activity.

Hong Kong ceased being a UK territory in 1997 under an agreement with Beijing dubbed “one country, two systems” in which it was allowed some autonomy.