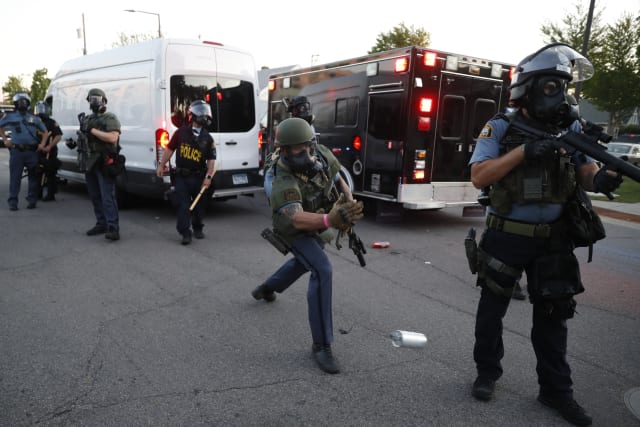 A US police force is facing global criticism after officers arrested a news crew live on air – with the UK’s Foreign Office saying journalists “must be free to do their job”.

CNN correspondent Omar Jimenez, producer Bill Kirkos and photojournalist Leonel Mendez were taken into custody in Minneapolis, Minnesota, at around 5am local time on Friday morning.

The trio, who had been covering protests in the city over the death of George Floyd – a black man who died while being arrested by police on Monday – were released around an hour later.

Four Minneapolis police officers involved in the arrest of Mr Floyd were fired hours after a bystander’s video showed him pleading that he could not breathe as a white officer knelt on his neck.

Before his arrest on Friday, Mr Jimenez, who is also black, identified himself as a reporter, showing officers a CNN badge and telling them “wherever you want us (we’ll) get out of your way”.

However, in a tweet, Minnesota State Patrol said the three “were released once they were confirmed to be members of the media”.

Minnesota Governor Tim Walz has spoken with CNN president Jeff Zucker and said he “deeply apologises” for what happened, describing the arrests as “unacceptable”.

Mr Jimenez was back on CNN explaining what happened later on Friday morning, and described the experience as “nerve-wracking”.

“The one thing that gave me a little bit of comfort was that it happened on live TV,” he said.

“The country was seeing what was happening in real-time right before their eyes, you don’t have to doubt my story, it’s not filtered in any sort of way … but it certainly was nerve-wracking at certain points.”

In a statement, the Foreign Office said: “We understand that the journalists have been released and the Governor has apologised for the arrest.

“As we’ve said before, journalists all round the world must be free to do their job and hold authorities to account without fear of retribution.”

He tweeted: “These THUGS are dishonoring the memory of George Floyd, and I won’t let that happen… any difficulty and we will assume control but, when the looting starts, the shooting starts.”

Twitter later added a notice to Mr Trump’s tweet stating that it violated the website’s rules regarding the “glorification of violence”.