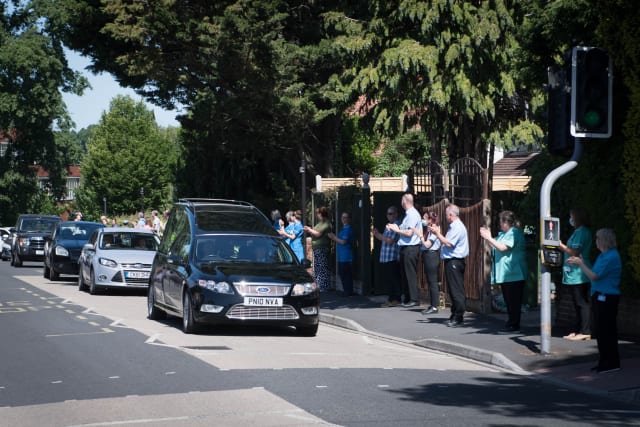 Tearful colleagues clapped as they stood socially-distanced along the roadside outside the hospital as the hearse drove by.

The procession was held to enable staff to pay their respects to the 61-year-old ahead of the private funeral, which was limited under lockdown guidelines.

Paula Head, chief executive of University Hospital Southampton, also led a round of applause for all the staff.

She said: “Mike was a really loved and valued member of the team known across the hospital for his cheeky sense of humour and the fact he always wore shorts.

“His team were too upset to talk in person but I would like to pass on that he was really appreciated for his humour and love of spicy food, in fact his sandwiches were known for their concoction.

“He was also a stickler for the rules and would quite often tell people off if Mike’s corner was not kept tidy in the linen bay.

“He was also prepared to test out newly-opened restaurants and pubs and come back and report to the team.

“He was part of the UHS family and he will be really missed.”

She added: “Our thoughts are with Mike’s partner, Sandy, and his family and he will remain fondly in our thoughts, particularly those of his close colleagues and the staff he worked with on the wards regularly.”