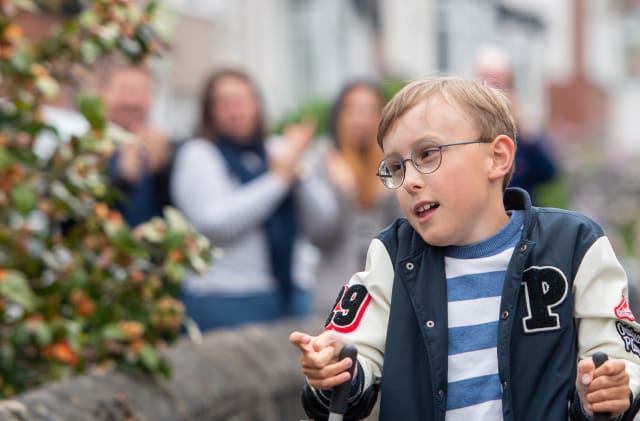 A nine-year-old boy with cerebral palsy is gearing up for the final leg of what he has called his “ginormous challenge” to walk a marathon using his walker during the lockdown.

Tobias Weller has been named ‘Captain Tobias’ by the friends and neighbours who have come out to cheer him in their dozens for weeks as he completes 750 metres of his 42,195-metre target each morning.

His supporters are expected give him his biggest socially distanced boost yet when he sets off to complete the 26.2 mile total on Sunday morning on the street outside his Sheffield home.

And the young fundraiser – who was inspired to take to his walker by the exploits of Captain Tom Moore – has already raised more than £40,000 for Sheffield Children’s Hospital and Paces School, his special school in the city.

His exploits have led to TV appearances and goodwill messages from around the world.

“There have been so many changes in Tobias – socially and physically.

“And he’s much more confident now in all sorts of situations.

“It’s such a step towards an independence he didn’t have before.”

Ms Garbutt said: “The support he gets every day here is just fantastic.

“Day after day people have come out clapping and cheering him.

“Of course, we haven’t had much bad weather but, even when we’ve had rain and the odd snow flurry, everyone’s still come out to support him.”

The money raised by Tobias, who also has autism, will help the Children’s Hospital Charity through its emergency Covid-19 appeal and Paces School, a non-maintained special school where the ethos is on children being challenged to reach their full potential.

Abbie Pervin, regional fundraising manager at The Children’s Hospital Charity, added: “We’re very proud of Tobias’ fantastic achievement, not only the amazing total raised for the hospital but also the personal determination it has taken him to walk a marathon.

“He thoroughly deserves all of the well wishes that he has received and the money he has raised will help thousands of children and families who depend on Sheffield Children’s. Thank you Captain Tobias.”