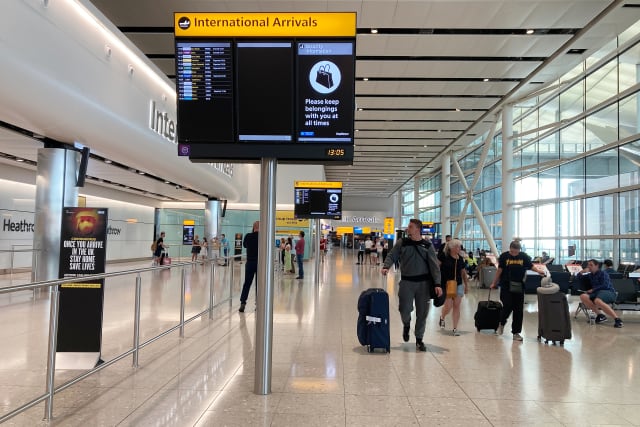 The number of passengers arriving in the UK by air fell “sharply” since the start of the coronavirus pandemic from around 7.1 million in January to 112,300 in April.

The figure for last month is 99% lower than the number of air passengers who came into the country in April 2019, according to the Advance Passenger Information (API) data published by the Home Office.

A report published on Thursday said the majority (58%) of arrivals since the lockdown was announced on March 23 were British nationals coming back to the UK.

The remaining 42% “will include foreign nationals who are UK residents returning to the UK, dependants of UK residents, and other non-British nationals”.

While the reduction in air travel was “most marked”, over this period the number of passengers arriving by sea was 97% fewer and by rail was 98% fewer than the same time previous year, according to the report.

It said: “The Covid-19 pandemic has had a significant impact on the UK immigration system, both in terms of restricting migrant movements to and from the UK and the impact on operational capacity.”

But the data is classed as provisional and figures are not exact because they are rounded to the nearest 100 passengers.

The report said the figures, derived from API and Border and Immigration Transaction Data (BITD), “are not designed for statistical purposes and there are known issues in producing estimates of arrivals from these sources.

“Neither data source provides an exact count of the number of arrivals.

“However, the data are being included here to provide an indication of the key trends in passenger arrivals in response to the Covid-19 pandemic and associated lockdown measures.”

The report does not included figures for all those arriving by sea or rail, by private aircraft or from the Common Travel Area (CTA) between the UK, Ireland, Isle of Man and Channel Islands.