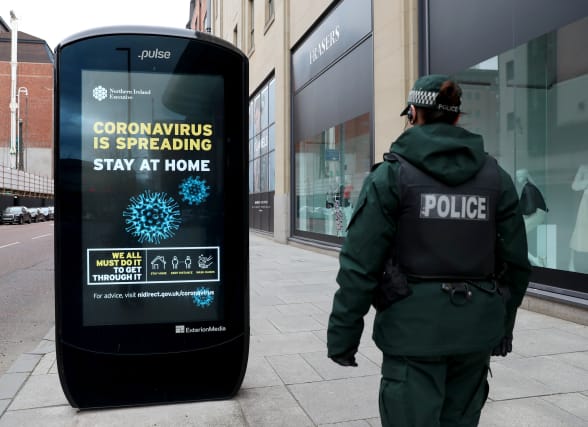 Police have no specific guidelines for carrying out enforcement action at funerals, a senior officer has told Stormont’s justice committee.

There has been criticism of police on social media following the emergence of pictures showing large crowds attending some funerals.

Assistant Chief Constable Alan Todd said policing at funerals is “difficult” due to a lack of specific instructions in the coronavirus regulations.

He told MLAs: “Funerals are a hugely emotive and emotionally sensitive time for everybody involved.

“There’s been a lot of public discourse from a whole lot of angles about funerals.

“What’s permissible or not, what is guidance or not is a matter for the legislators and the Executive.

“Police are generally operating in a space where there is no legislation, not a lot of guidance and trying to apply some common sense to bring about a successful outcome.”

Mr Todd said he is not sure anyone would think that police taking a “hands on” approach to enforcement at a funeral would be “a good idea”.

He said officers seek assurance from families, clergy and funeral directors for “an acceptable outcome in the spirit of the health protection regulations”.

Mr Todd said he has not issued guidelines to officers around funerals, “because there are no guidelines issued from the people who laid the regulations”.

“You can see the difficulties and trying to make some decisions around that.”

Mr Todd also defended police from criticism over the weekend after some motorists were turned away from Portstewart, saying the town had been “full to the brim”.

He described some as being “quite belligerent with officers” at the roadside.

“But in the current environment, it is quite indicative of the changing public mindset, about people saying, ‘we were happy to play with the rules, and now we’re not’,” he said.

Mr Todd was asked by Green Party MLA Rachel Woods whether the reported actions of the Prime Minister’s top aide Dominic Cummings have had an impact on the ground in Northern Ireland.

“I leave it for others to judge how other events have played into that space, but my officers are certainly getting that experience on the ground,” he added.

The PA news agency revealed earlier this week that the number of fines issued by the PSNI over coronavirus regulations had dropped from almost 400 in April to 30 in May.

Mr Todd said as time has gone on, both police and the public have become more “comfortable” with the regulations and the number of enforcements has “tailed off”.

He added: “As legislators loosen legislation and loosen requirements, there will be less policing of it.

“We’ve gone to the first phases of stage one of the Executive’s recovery plan which allows people to do more things, more places, more of the time.”

He said regulation five on the restriction on movement now has “so many exceptions”, it is “not a good use of either time or public confidence”.

He added: “Legislation has eased that to a point where it has to be trust-mode and not an enforcement on compliance mode.”

He said officers have “no powers to enforce social distancing” to ensure people remain two metres apart, however he said enforcement action will continue to be taken when large groups of over six people gather in public.

Meanwhile, Mr Todd described crime levels as rising from 35-40% of pre-lockdown levels to 20% by last week.

The focus for the Police Service of Northern Ireland (PSNI) has now shifted to delivering policing from “crisis management” to policing in a “Covid environment”, he added.