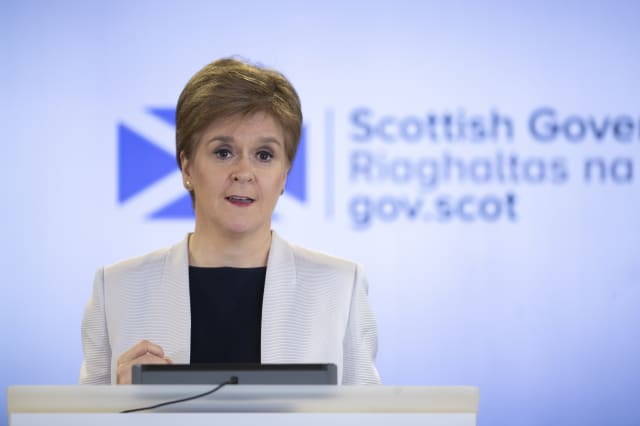 Nicola Sturgeon has announced the first “cautious” steps out of the coronavirus lockdown will begin in Scotland on Friday.

The start of the first phase of a four-step plan will allow Scots to meet people from other households outdoors in parks and gardens – though people are advised to keep any gatherings to a maximum of eight people.

Some outdoor sports will also be permitted once again from Friday, such as golf, tennis and bowls, garden centres can reopen, and the Scottish Government will “no longer discourage” drive-through restaurants from opening.

People will be able to sunbathe in parks – but the First Minister has urged people not to flock to tourist destinations and beauty spots.

Recent good weather has already seen large numbers of people head to areas such as Portobello beach in Edinburgh, but Ms Sturgeon said the “strong advice” as lockdown eases is for people to stay within about five miles of their home, and to avoid places if they are busy.

At her daily briefing in Edinburgh on Thursday, the First Minister confirmed: “We can now move into phase one of our four-phase route map out of lockdown.”

She admitted she is “a bit nervous” about the impact the changes could have on infection levels, saying: “I am worried that the limited changes we are making to these rules, the very careful changes, might lead to much greater change in reality.”

She said she has “every faith that people will do the right thing”, but warned if Scots do not follow guidance there will be “no alternative” but for ministers to legislate and the easing of restrictions could be reversed.

She said lockdown is being eased from Friday after a “sustained and unmistakable” downward trend in coronavirus cases.

The crucial R number – how many people an infected person passes Covid-19 on to – is now judged with “reasonable confidence” to have been below one for more than three weeks.

Ms Sturgeon also announced during her briefing a further 12 deaths amongst patients who have tested positive for coronavirus – bring the total under this measure to 2,316.

Stressing progress against the virus remains “fragile”, she said: “What I have announced today are important first steps back to some kind of normality, but they are by necessity cautious.”

She said while the lockdown – which has been in place since March 23 – is being “modified slightly”, the crisis is “not over” and she called on people to “exercise good judgement at all times”.

However she added: “Although these changes are small at this stage I really hope they do make a positive difference and leave all of us with a real sense of hope we are on the right track.”

Ms Sturgeon said her confidence that the time is right to move to phase one was boosted by the start of the national Test and Protect scheme in Scotland.

Under the system, Scots will be expected to be tested for Covid-19 if they show symptoms of the disease – and if they test positive they will be asked to supply details of anyone they could have passed it on to.

Those who are identified in that process as coming into contact with a confirmed case will be contacted by a tracer and will be asked to self-isolate for 14 days, to ensure they do not pass the virus on.

In response to questions during the daily briefing about contact tracing following an outbreak of the disease at a Nike conference in Edinburgh early this year, interim chief medical officer Dr Gregor Smith said: “We’re going into that face-to-face contact in much more detail now.”

But Scottish Conservative leader Jackson Carlaw said contact tracing has so far not been “up to scratch”.

He added: “Nicola Sturgeon admitted to being nervous about this phase of the exit and no wonder.”

Labour health spokeswoman Monica Lennon said: “The success of the Scottish Government’s Test and Protect strategy is reliant on the co-operation and confidence of the public.

“That’s why questions about the lack of contact tracing in response to the Nike Covid-19 outbreak in Edinburgh need straight answers.”