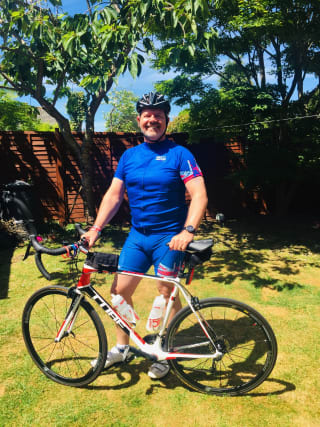 A professional fundraiser is honouring his grandfather who was involved in the Dunkirk evacuations by cycling the distance from the French beaches to Dover every day of the 80th anniversary commemorations.

John Carpenter, an area fundraising manager for Help for Heroes, launched his solo effort after the planned Big Battlefield Bike Ride organised by the service personnel charity was cancelled because of the Covid-19 crisis.

Instead, for each of the 10 days of the original Dunkirk evacuations – from May 26 to June 4 – the 54-year-old is cycling 75km (46 miles) in memory of his grandfather Michael Mooney.

Mr Mooney was part of the British Expeditionary Force (BEF) in France and Belgium, and one of the more than 300,000 brought to safety by a fleet of 800 small boats.

On May 29, 1940, the 21-year-old arrived at De Panne beach with his Royal Artillery unit and was ordered to swim out to the boats.

But because he could not swim, he walked to Dunkirk harbour where he was able to board HMS Javelin and arrive in Dover the next day.

Mr Carpenter, a father-of-two, from Chandler’s Ford, Hampshire, said: “My grandfather was a huge role model for me, especially during my teenage years.

“Dunkirk is such an important part of British history, so to imagine him being part of that, especially when he couldn’t swim, is amazing.

“On the 80th anniversary of Dunkirk it feels important to mark what he, and so many others, had to go through and I know he would have been proud of me fundraising for Help for Heroes.”

Mr Mooney was a short while later sent to India to reinforce the British defences against the Japanese before being transferred to Burma.

In June 1944, he was wounded in the right thigh and spent three months recovering in an Indian hospital, returning home in 1945.

In 1946 he developed a bad cough which was diagnosed as having tuberculosis and spent two years in hospital and, with parallels to Covid-19, he was forced to isolate himself from close contact with his children such as having separate cutlery and china.

He said of this time: “The operation was a great success. After more rest at home I became fit and well.

“I felt very isolated and it was hard, but none of my children contracted the disease, so it was worth it.”