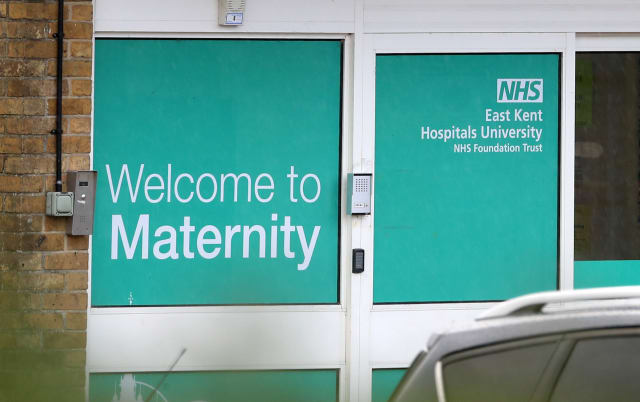 An “urgent need for actions” to improve maternity care at a scandal-hit NHS trust remains, despite some improvements being made, a midwives union has said.

Among those treated at the trust was Harry Richford who died in a “wholly avoidable” tragedy, seven days after his emergency delivery in November 2017, an inquest found.

Inspectors found a number of improvements had been made at William Harvey Hospital in Ashford and Queen Elizabeth the Queen Mother Hospital in Margate.

However concerns remain, including instances where midwives were left to assess women, who may be high risk, rather than a doctor.

“The service had a vision for what it wanted to achieve and a strategy to turn it into action.

“Despite these green shoots of improvement there was still work to be done especially in antenatal services.

“At William Harvey Hospital, the antenatal clinic in outpatients was poorly maintained.

“Staff in day care did not always report incidents, which meant managers could be unaware of avoidable events on the unit.

“We found that because the risk to women was not effectively managed in antenatal services, midwives sometimes had to review and assess women, who may be at high risk, rather than a doctor.

“Midwives told us that a senior doctor was sometimes available in clinic.

“However, it was usually a junior doctor with limited experience in obstetrics that would review and discharge.”

“There is an urgent need for actions to be completed so safety is not compromised and this needs to happen at board level within the Trust.

“Safety must be the absolute priority and the basis on which all care is delivered and on which all decisions are made.

“Good leadership at every level of maternity services is key to delivering safe, high-quality care for women and their babies.”

Responding to the CQC report, trust chief executive Susan Acott said: “The improvements and positive work cited in the CQC’s report is a testament to the hard work put in by the maternity and obstetric teams to improve the quality of services for women and babies in east Kent.

“We know we have much more to do.

“We are already acting on the CQC’s recommendations, and have improved staffing levels in the antenatal triage and day care service, implemented a nationally-recognised safety system in that service, and appointed a maternity governance lead to co-ordinate the review and improvement of the service’s internal governance processes.

“We are determined to provide an excellent standard of care to every mother and child who uses our maternity service and we will continue to make improvements and make sure positive changes are thoroughly embedded, so local families can have absolute confidence in their care.”

In April, a report by the Healthcare Safety Investigation Branch (HSIB) was published which identified “recurrent safety risks around several key themes of clinical care” in the trust’s maternity services.