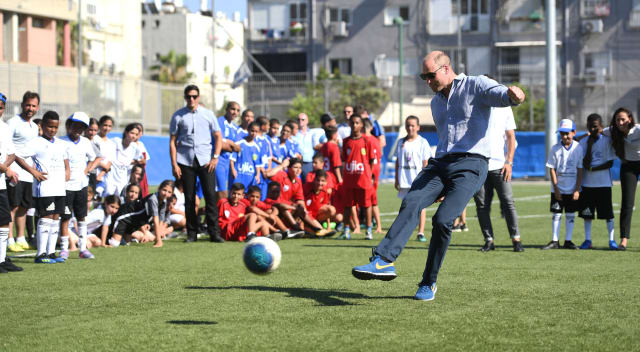 The Duke of Cambridge has admitted his poor eyesight allowed him to overcome the anxiety of giving important speeches – as the faces of the audiences were just a blur.

William’s candid comments were made in a BBC documentary about men’s mental health in the world of football, and he said about male suicide: “It’s scary and it’s frightening and it’s real.”

The duke believes the continuing “stigma” around mental health stems from the internalised grief and sadness the country felt after two world wars and people’s desire to forget the experience and “get on with life”.

Asked by a grassroots footballer, who suffers from anxiety, if he worried or felt uneasy constantly being in the public gaze the duke replied he did when younger when making big speeches.

William went on to say in the documentary being screened on Thursday evening: “…my eyesight started to tail off a little bit as I got older, and I didn’t used to wear contacts when I was working, so when I gave speeches I couldn’t see anyone’s face.

“And it helps, because it’s just a blur of faces and because you can’t see anyone looking at you – I can see enough to read the paper and stuff like that – but I couldn’t actually see the whole room. And actually that really helped with my anxiety…”

William was followed for the past year for the BBC film as he travelled around the country promoting his Heads Up initiative, which aims to raise awareness about mental health and encourage football supporters to speak about their problems or support a fellow fan.

The avid Aston Villa fan revealed football has become more important to him as he has got older: “You know it’s weird because, I’ve always loved football but I love football more now than I’ve ever loved it before and I don’t know what it is, whether it’s because I’m a parent now and I need football more in my life, I don’t know maybe it is that.”

During the documentary – Football, Prince William And Our Mental Health – grassroots players and seasoned professionals talked about their experiences of mental health issues.

During a visit to West Bromwich Albion Football Club to meet players past and present who have experienced people close to them committing suicide, the duke said: “It is one of the biggest killers of young men under 45.

“As pain and grief goes, and I’ve heard this from sadly too many families who have been bereaved by suicide, it is one of the rawest forms of grief because you’re left with so many unanswered questions.

William went on to say: “Suicide, it’s scary and it’s frightening and it’s real. Men seem to have a real issue with opening up and being able to talk about it.

“If we can have a major impact on lowering suicide rates, that’s a success from this campaign.”

The coronavirus outbreak has meant the Heads Up project is on hold due to the disruption to football matches across the country but William said he hoped another legacy of his initiative would be “football clubs from grassroots to the elite level can all point to, or demonstrate, or have within them some sort of mental health facility or support that can look after players of all walks of life…”

Football, Prince William And Our Mental Health will be broadcast on Thursday at 8.05pm on BBC One.