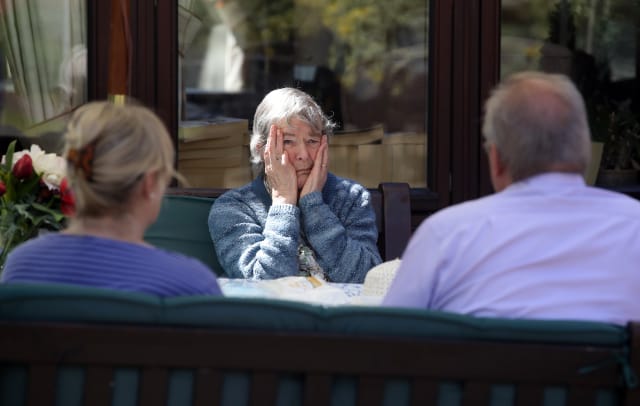 A care home opened for the first time in weeks to allow socially-distanced visits from family members, while the Duchess of Cornwall has joined an all-star line-up for a retelling of Roald Dahl’s James And The Giant Peach.

Here are some of the more uplifting stories you might have missed on Wednesday.

There were emotional scenes at a care home where residents were allowed to meet family members for the first time in weeks – albeit at a distance.

The Eothen care home in Whitley Bay, North Tyneside, is carrying out routine coronavirus testing of staff and residents, and so far none of the 33 people who live there have come down with the virus.

The management team has now allowed family members to meet their loved ones face-to-face outside, while maintaining safety standards.

Care home manager Dawn Esslemont said: “It’s lovely for the residents to see them face-to-face, we have been working very hard trying to keep them in touch via phone, FaceTime and Zoom, but they are not the same.”

The Duchess of Cornwall is joining Hollywood stars including Meryl Streep, Benedict Cumberbatch and Ryan Reynolds in lending her voice to a retelling of James And The Giant Peach.

Roald Dahl’s classic children’s book has been recorded from start to finish in 10 instalments, for children and families currently in lockdown across the globe amid the coronavirus pandemic.

Filmmaker Taika Waititi is joined by different guest stars in each episode to voice the assortment of characters, with Camilla featuring alongside Black Panther actress Lupita Nyong’o and Frozen star Josh Gad in the sixth episode.

Before recording, Camilla said to Waititi: “I’m thrilled to do it. Not that I’m much of an actor, but I will do my best.”

An eight-year-old boy with cerebral palsy and hydrocephalus has hit his fundraising target after delighting his online followers with scores of piano tunes chosen by those who donate.

Lennie Street, from Morley, West Yorkshire, cannot stand or walk independently but loves music and decided to challenge himself during lockdown to play 100 songs picked by his supporters.

He has had thousands of views on his social media accounts as he tried and mastered everything from Beethoven to Justin Bieber and Stevie Wonder – in the process raising £5,000 for his special school, Paces, in north Sheffield.

Lennie said: “What a huge amount of money. I never dreamed I would be able to raise so much just by playing the piano. Thank you to everyone who has supported me.”

A 103-year-old woman is walking the hill outside her care home to raise funds for the British Heart Foundation.

Inspired by Captain Sir Tom Moore, Joan Willet aims to walk 17 miles up and down the steep hill before she turns 104 on July 19.

The former teacher had life-saving valve replacement surgery after a second heart attack when she was 82.

Since then, she has walked up and down a steep hill near the home in East Sussex, where she has lived for 22 years, to try and stay fit.

She said: “I am so grateful to the BHF and its research that has made operations like mine possible. I wouldn’t have survived without it, let alone reach the age I am.”