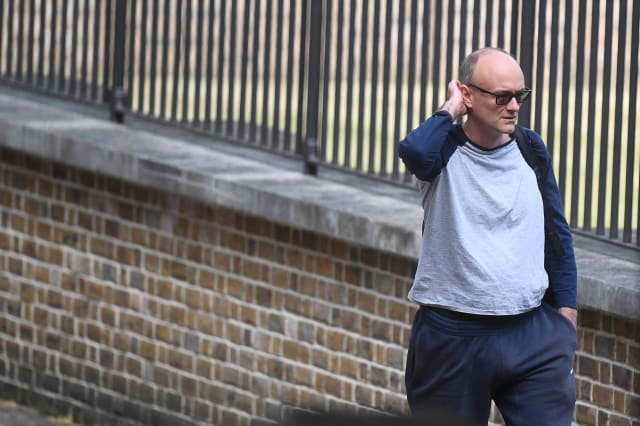 A revolt within the Conservative Party continues to grow with at least 30 MPs having publicly called for Dominic Cummings to resign or be sacked.

The list of rebel Tories grew on Tuesday as many expressed frustration and dismay after Boris Johnson’s chief adviser said he had “no regrets” over his controversial trip to Durham.

In a press conference on Sunday, Mr Cummings defended a 260-mile trip from London to the North East of England he made with his family during lockdown, saying he believed he behaved “reasonably”.

By Tuesday night, 30 Conservative MPs had called for Mr Cummings’ removal, with a further nine voicing displeasure over his actions.

Senior ministers have expressed public support for the defiant adviser, but media reports say a number of Cabinet members have privately called for him to be ousted from No 10.

It comes as a YouGov survey for The Times showed the Conservative lead over Labour has dropped by nine points during the Cummings saga.

Support for the Government fell four points in the week to Tuesday, to 44%, with Labour rising five points to 38%.

Mr Johnson will face a grilling from MPs at a Commons Liaison Committee meeting on Wednesday.

On Tuesday, Douglas Ross, the parliamentary under-secretary of state for Scotland, quit the Government, saying he could not “in good faith” defend Mr Cummings’ actions.

In an interview with the BBC, Mr Ross said there were still unanswered questions regarding Mr Cummings’ visit to Durham.

On his decision to quit his role, he said: “Well it’s a personal decision. I can only be accountable for my own decisions and, as I’ve said, this is not unanimous.

“I think there are still unanswered questions with his (Mr Cummings) statement and that’s why I felt I couldn’t go out and defend it.”

Other Tory MPs speaking out against Mr Cummings included veteran Sir Roger Gale, who said the Conservative backbench 1922 Committee should make it clear to the PM his adviser should go.

“The time I think has come for Mr Cummings to resign or for the PM to dispense of his services,” Sir Roger told the PA news agency, adding that 1922 Committee members were “elected to tell the PM what he needs to hear, not what he wants to hear”.

Party colleague Craig Whittaker told Newsnight that Mr Cummings’ position was “untenable”, adding: “I respect he is taking a decision but what I can’t get my head around is why he can’t take responsibility for that decision.”

Senior Tory William Wragg, chairman of the Public Administration and Constitutional Affairs Committee in the Commons, said it was “humiliating and degrading” to see ministers put out agreed lines in defence of Mr Cummings.

Caroline Nokes, chairwoman of the Commons Women and Equalities Committee, said she had informed party whips there could not be “wriggle room” for some people when it came to lockdown rules.

Former health secretary Jeremy Hunt said he believed Mr Cummings broke lockdown rules on multiple occasions, but added that he was not calling for the Prime Minister’s adviser to resign.

In a letter sent to constituents, Mr Hunt wrote: “Having watched the broadcast yesterday, my own view is that what he did was a clear breach of the lockdown rules – coming back into work when he had been with his wife who was ill, driving to Durham instead of staying at home, and visiting Barnard Castle.

“These were clearly mistakes – both in terms of the guidance which was crystal clear, and in terms of the signal it would potentially give out to others as someone who was at the centre of government.

“But as someone who has been at the centre of media storms with a young family, I know you do make mistakes in these situations. I have made them myself. So I am afraid I am not going to add my voice to the list of those calling for him to resign.”

But Conservative MP for Rugby Mark Pawsey said Mr Cummings had “acted very much against the spirit of the lockdown rules” and should be sacked, while former chief whip Mark Harper said Mr Cummings should have offered his resignation to the Prime Minister.

He said he would “expect an adviser who had damaged the credibility of the Government’s central message so badly and had become the story to consider their position”.