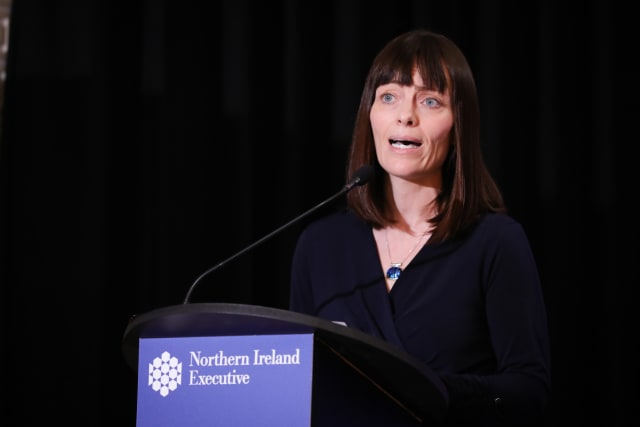 The Stormont executive must ask the UK Government to extend the Brexit transition period, a minister has said.

Infrastructure minister Nichola Mallon also accused the Government of failing to offer any details on how the Northern Ireland protocol will be implemented and how it will be paid for.

The protocol is the arrangement by which Northern Ireland continues to follow single market rules for goods and administers the EU’s customs code at its ports.

Ms Mallon said the last thing the region needed amid the coronavirus emergency was a “cliff edge” exit at the end of 2020 without an agreed trade deal.

Her comments come as EU chief negotiator Michel Barnier confirmed that the bloc would be willing to consider a two-year extension of the transition arrangements to provide time to reach a comprehensive agreement.

But the UK Government has insisted the transition period will end as scheduled at the end of the year.

Addressing the daily Covid-19 media briefing at Stormont, Ms Mallon said: “On the issue of Brexit, the UK exit is a short seven months away.

“As minister I have asked the British government for a clear and detailed plan for delivery of implementation of the protocol – there has been nothing.

“I have asked the British government for clear commitments around the amount of finance that will be made available for the implementation of the protocol – nothing.

“And I think that we look at the impact of covid on business, communities and families, the last thing that anyone needs is a cliff edge of a Brexit that no one has prepared for.

“So I think that anyone who is approaching this with common sense has to come to the conclusion that we need to be requesting an extension.

“I have raised this issue with my executive colleagues and I remain firmly of the view that in the interests of everyone in Northern Ireland we should be asking the British government for an extension.”

Under the terms of withdrawal from the EU, the UK only has until July 1 to decide whether to extend the transition period.

Last week, the Government outlined plans for checks on some goods entering Northern Ireland from the rest of the UK.

It said some infrastructure screening animal and food products at ports will be “expanded” but bureaucracy will be kept to a “minimum”.

The Government also insisted there would be no new physical customs infrastructure installed in Northern Ireland.