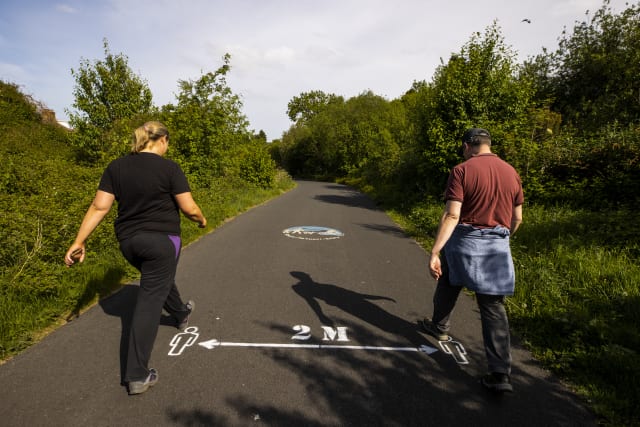 The number of fines issued by police in Northern Ireland over social distancing rules dropped from nearly 400 to 30 in a month, it can be revealed.

Regulations announced by the Northern Ireland Assembly on March 28 state that no person may leave the place where they are living without reasonable excuse, in an attempt to stem the spread of coronavirus.

It gave the Police Service of Northern Ireland (PSNI) powers to issue fines of up to £960 for those who repeatedly disregard officers’ requests to disperse.

He said the approach of police was engaging with people, explaining the regulations and encouraging them to follow them, before turning to enforcement as a “last resort”.

The initially high number of fines reportedly led Mr Todd to instruct his officers to seek the approval of a senior colleague before issuing penalties.

In an email to officers, reported by The Impartial Reporter newspaper, he described the measure as a “short-term quality assurance and reporting measure”.

The number of fines issued by police dropped dramatically in May, according to PSNI figures released to the PA news agency.

Between May 1 and 26, 30 fines and 92 community resolution notices were issued by officers.

Ulster Unionist MLA Doug Beattie said the legislation had not as “as clear as it should have been” for police officers to enact.

“Police came under an awful lot of criticism at the start of the lockdown in regards to compliance, fines and the guidance they were giving to people,” he said.

“I think for many police officers this was a new field to them to have to police, it was something different, it was something new, and the law that politicians created around this probably wasn’t as clear as it should be.

“There was a backlash within society. I think that is one of the reasons why there is a slightly more relaxed view of that.

“I also think that as this has developed, police have become more comfortable with the legislation, with politicians slightly changing the legislation to make it more sensible, the situation has changed.”

He added: “I don’t think it is because there is more compliance, if I look at our streets, our roads, our shops, there are more people out there, less social distancing, a lot of people flouting that legislation.

Meanwhile, data compiled by the Department for Infrastructure has indicated a steady increase in the number of road users since lockdown started at the end of March.

Last weekend, May 23-24, traffic levels were recorded as minus 46% of the baseline.