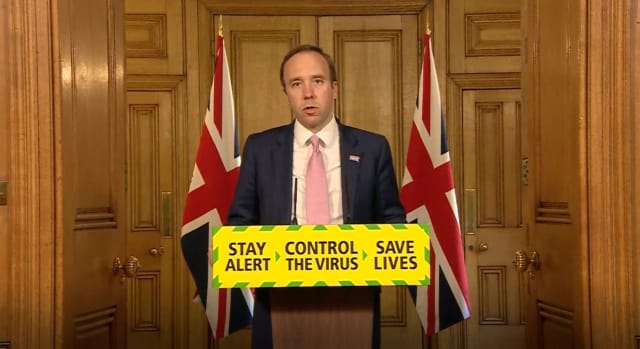 People with coronavirus will have their contacts traced from Thursday in a bid to control the spread of Covid-19 and help ease lockdown restrictions, the Government has announced.

NHS Test and Trace will officially launch across England with the help of 25,000 contact tracers, while an accompanying app is still delayed by several weeks.

The aim of the scheme – which will run alongside calls to keep up social distancing and handwashing – is to cut off routes of transmission for coronavirus and prevent a second peak of infection.

Launching the scheme, Health and Social Care Secretary Matt Hancock said: “As we move to the next stage of our fight against coronavirus, we will be able to replace national lockdowns with individual isolation and, if necessary, local action where there are outbreaks.

“NHS Test and Trace will be vital to stopping the spread of the virus. It is how we will be able to protect our friends and family from infection, and protect our NHS.

“This new system will help us keep this virus under control while carefully and safely lifting the lockdown nationally.”

Baroness Dido Harding, executive chairwoman of NHS Test and Trace, said: “NHS test and trace is designed to enable the vast majority of us to be able to get on with our lives in a much more normal way, but it requires all of us to do our civic duty.

“We will be trading national lockdown for individual isolation if we have symptoms.

“Instead of 60 million people being in national lockdown, a much smaller number of us will be told we need to stay at home, either for seven days if we are ill or 14 days if we have been in close contact.”

Under the plans, anyone with coronavirus symptoms will immediately self-isolate and book a test, preferably at a testing centre or, if necessary, for delivery to their home.

If the test proves negative, they do not need to do anything more.

But if the test is positive, NHS contact tracers or local public health teams will call them, email or send a text asking them to share details of the people they have been in close contact with and places they have visited.

Household members do not need to isolate at this point.

If the contact themselves then falls ill, they book themselves a test.

If this is positive, they stay home for seven days or until their symptoms have passed, and their household stays home for 14 days.

If it is negative, the contact must still complete their initial 14-day isolation period.

A close contact is defined as anybody who has been in close contact with an infected person in the two days before symptoms appear and up to seven days afterwards.

Baroness Harding said the Government could impose restrictions and fines on those who do not comply with the rules, but said ministers were not setting out to be punitive.

She said: “I think everyone involved in it has real faith in the British public’s ability to follow our guidance.

“If you look at what’s happened over the last two months, that’s what we as a country have done.

“So we’re not launching this with fines and penalties for people who don’t self-isolate, or who don’t give us their contacts.

“What we’re doing is asking everyone to play their part in protecting themselves, their families, and their loved ones.

“Now, the Secretary of State does have the public health legal ability to impose fines and penalties but that’s not how we’re launching this.

“We will beat this together, rather than making it punitive.”

Asked if the admission by Boris Johnson’s aide Dominic Cummings that he drove his family to Durham during lockdown hampered the message for people to comply with the rules, Baroness Harding said: “I’m not going to get drawn into any individual.

“This is about how 60 million of us behave, not about one person.

“I have great faith in the overall good nature of the great British public.”

Baroness Harding said 100% of tests would not be returned within 24 hours from the start, “but we will get closer and closer to it with each passing day”.

As part of NHS Test and Trace, testing facilities may be rapidly deployed to particular locations if there is an outbreak.

Those self-isolating will be eligible for statutory sick pay, while people who are self-employed will be able to access cash grants.

Professor John Newton, national coordinator of Test and Trace, said the new service – combined with social distancing and good hand hygiene, “will enable us to emerge more safely from lockdown”.

He added: “This approach will allow us to gradually return to more normal personal, social and economic lives while recognising that we have to stay alert and respond rapidly to any advice from the new service.”

Prof Newton said that because the evidence was incomplete, people who had already had the virus or taken an antibody test would still have to follow the rules.

Prof Newton said the standard symptoms to report were fever, continuous cough and a loss of smell or taste, but said “we need to have a pretty low threshold for offering people tests”.

He admitted that launching a programme of this size meant “something will go wrong somewhere along the line”, but added “we will learn a lot as we go”.

It comes as separate report, based on six volunteers tracking 58 people, found two-thirds of people did not fully cooperate, and most of those worked in the NHS or social care.

A further study from University College London found that contract tracing plus other measures such as social distancing and hand hygiene could drive down the number of new infections by 5-15%.

Coronavirus tests can be booked at nhs.uk/coronavirus or by calling 119.