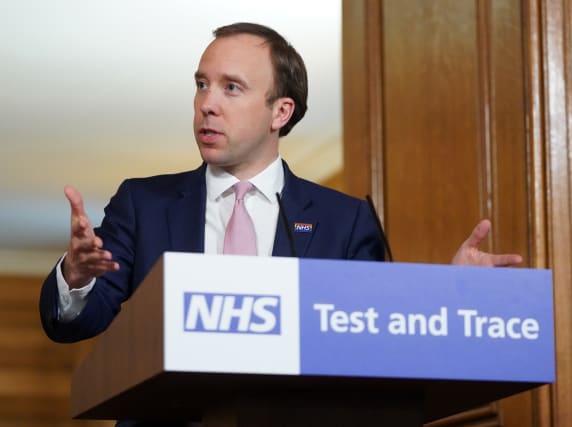 Health Secretary Matt Hancock has urged the public to carry out their “civic duty” and make a new test and trace system work – saying the only other option is continuing the lockdown.

NHS Test and Trace will officially launch across England on Thursday with the help of 25,000 contact tracers, while an accompanying app is still delayed by several weeks.

People with coronavirus will have their contacts traced under the scheme to cut off routes of transmission for the virus as a way of controlling local flare-ups.

Mr Hancock told the daily press briefing: “The big question that we’re all working to answer is this: until an effective treatment or vaccine comes through how can we get back to doing more of the things that make life worth living without risking safety or putting lives at risk?

“NHS Test and Trace is a big part – not the only part – but a big part of the answer to that question.”

Mr Hancock said that by tracking infected people and isolating their contacts, and by continuing social distancing, the national lockdown could be replaced with individual isolation.

“This is  national effort and we all have a role”, he added.

“The virus exists only to reproduce – that’s its sole biological purpose, to make as many copies of itself as possible.

“If we can thwart that purpose, we can control the virus and ultimately defeat it.

“We must all follow the NHS test and trace instructions as this is how we control the virus, protect the NHS and save lives.”

Under the plans, anyone with coronavirus symptoms will immediately self-isolate and book a test, preferably at a testing centre or, if necessary, for delivery to their home. Their household should start a 14-day isolation period too.

If the test proves negative, everyone comes out of isolation.

But if the test is positive, NHS contact tracers or local public health teams will call them, email or send a text asking them to share details of the people they have been in close contact with and places they have visited.

Their household members do not need to isolate at this point.

If the contact themselves then falls ill, they book themselves a test.

If this is positive, they stay home for seven days or until their symptoms have passed, and their household stays home for 14 days.

If it is negative, the contact must still complete their initial 14-day isolation period.

A close contact is defined as anybody who has been in close contact with an infected person in the two days before symptoms appear and up to seven days afterwards.

Mr Hancock said NHS Test and Trace would enable contact tracers to “hunt down the virus” to find out who has been infected.

“If you get symptoms, isolate immediately and get a test,” he added.

“If you are contacted by NHS test and trace instructing you to isolate, you must.

“It is your civic duty, so you avoid unknowingly spreading the virus and you help to break the chain of transmission.”

The Health Secretary pointed to the fact the Government could move to forcing people to comply with the scheme if needs be, with fines being one possibility.

He said: “This will be voluntary at first because we trust everyone to do the right thing.

“But, we can quickly make it mandatory if that is what it takes.

“Because, if we don’t collectively make this work, then the only way forward is to keep the lockdown.”

Earlier, Prime Minister Boris Johnson suggested the new plan would not reach the “world-beating level” he promised by June 1, but would take a few weeks.

He also committed to ensuring test results are returned to individuals within 24 hours – but refused to give a target deadline.

Asked to introduce the target by former health secretary Jeremy Hunt, the PM replied: “We have done that… yes, absolutely.”

Pressed on when it would be met, Mr Johnson said: “I’m not going to give you a deadline right now, Jeremy, because I’ve forbidden from announcing any more targets and deadlines.

“I don’t want to give you an exact deadline of when we will get down to 24 hours but that is plainly the ambition and we will do it as soon as we can.”

The chief executive of NHS Providers, Chris Hopson welcomed the new programme but said speeding up test results was key and that local plans had only just started.

He added that there was “still a long way to go to create the fit for purpose regime we need.”

Baroness Dido Harding, executive chairwoman of NHS Test and Trace, said the scheme was central to easing the lockdown further.

She said: “NHS test and trace is designed to enable the vast majority of us to be able to get on with our lives in a much more normal way, but it requires all of us to do our civic duty.

“We will be trading national lockdown for individual isolation if we have symptoms.

“Instead of 60 million people being in national lockdown, a much smaller number of us will be told we need to stay at home, either for seven days if we are ill or 14 days if we have been in close contact.”

As part of NHS Test and Trace, testing facilities may be rapidly deployed to particular locations if there is an outbreak.

Those self-isolating will be eligible for statutory sick pay, while people who are self-employed will be able to access cash grants.