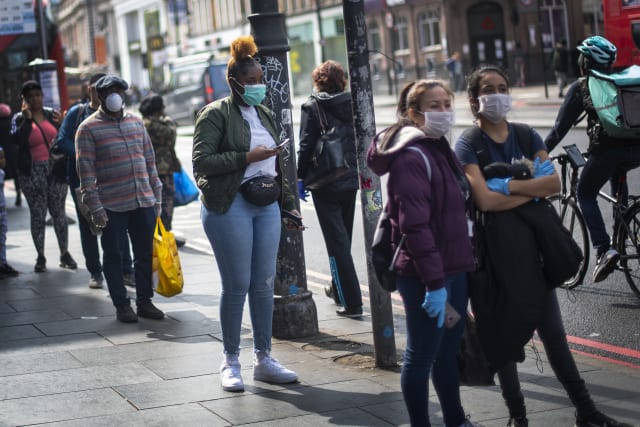 Clothes shopping may require face masks and changing rooms could be kept shut in efforts to reassure customers and help stop the spread of Covid-19, a professor of infectious diseases has said.

Managing the flow of people and ensuring social distancing rules are adhered to will be the principal problem in clothes shops, according to Stephen Baker from the Department of Medicine at the University of Cambridge.

His comments come after the Government said most non-essential retailers could reopen from June 15.

Scientists have said there is a lack of evidence about how long viruses stay on fabrics, and Prof Baker said the use of hand sanitiser will be a key measure among other possibilities such as face masks, changing rooms remaining closed or cubicles being sprayed with ethanol after every use.

On the issue of face masks, Prof Baker told the PA news agency: “The Government might bring it in, but also then clothes shops… or places with confined areas may actually stipulate that to enter the premises you have to wear a face mask.

“It might just be a mechanism of reassuring people when they go into shops that they are not at risk.”

Prof Baker said shops will have to reassure customers about confined spaces such as changing rooms.

“I would probably say that they may not allow people to try on clothes, given the risk of the confined space, of being enclosed in cubicles.

“Or they may bring in routine cleaning in between people visiting them.”

Prof Baker suggested shops may put up signs informing customers that changing rooms are wiped down with ethanol between every use.

He also said the idea of quarantining items for 72 hours – as some charity shops have said they will do with donations, and which Waterstones has said it will do with books that are handled but not bought – is a “good idea”.

But he said these measures will be more about reassuring the public, rather than being based on hard science.

“Whether it will have any impact or not I don’t know, but actually I think that the whole purpose of this would be to reassure customers coming into these places that there’s no risk,” he said.

Prof Baker said the chance of people getting the virus from objects in shops is “relatively low” but impossible to measure scientifically.

Bill Keevil, professor of environmental healthcare at the University of Southampton, said superbug bacteria and viruses such as flu and coronaviruses can linger for a long time on certain hard surfaces, meaning cleanliness is essential for consumers and retailers.

He told the BBC Radio 4 Today programme: “They (superbug bacteria and viruses) all can survive days on a touch surface, that may surprise people.

“That’s why it’s so important to wash hands and also regularly clean all touch surfaces.

“In terms of shops, when you go into a shop you’re obviously careful about trolley handles, door handles, this kind of stuff, they should certainly be kept regularly clean.

“The issue is now coming down to things like clothes, fabrics. Should people touch them?

“If people have washed their hands properly, you might argue that there shouldn’t be a transmission risk on to the fabrics.

“But people are now suggesting if you try on a garment and you don’t want it, that garment should be put into quarantine for several days before it’s then being put back on to the shelves.”

Prof Keevil said there is a lack of evidence on how long viruses stays on fabrics once touched.

But he said a study in the US showed coronavirus survived less than a day on cardboard, while existing studies suggested bacteria only survived for “minutes” on copper alloy surfaces.

Prof Baker told PA he is unaware of any ongoing research into how long the virus survives on fabric.