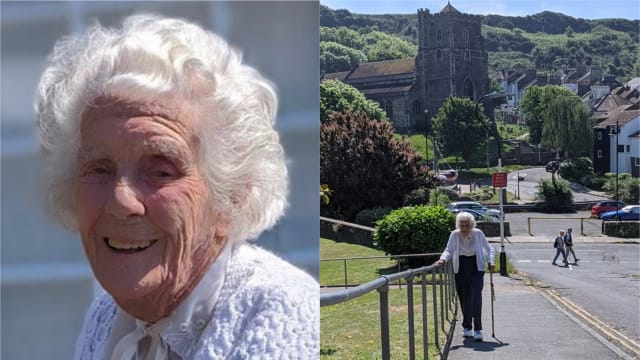 A 103-year-old woman is walking the hill outside her care home to raise funds for the British Heart Foundation.

Inspired by Captain Tom Moore, Joan Willet aims to walk 17 miles up and down the steep hill by her next birthday, on July 19.

The former teacher had life-saving valve replacement surgery after a second heart attack when she was 82.

Since then, she has walked up and down a steep hill near the home in East Sussex, where she has lived for 22 years, to try and stay fit.

After seeing Captain Tom on TV, she set up a Justgiving page for the British Heart Foundation and raised more than £500 in 48 hours.

She said: “I am so grateful to the BHF and its research that has made operations like mine possible. I wouldn’t have survived without it let alone reach the age I am.

“I could barely walk afterwards but that’s when I came to live Old Hastings House and the staff have been marvellous and encouraged me to get well and to retain my independence, which luckily I still have.

“My achievement is also their achievement as I regularly tell my friends. For example, they supported me at the age of 85 to learn how to use the computer for the first time.

“I put my longevity down to natural curiosity.”

The centenarian began her career as a teacher, just before the outbreak of the Second World War. She tried to join the RAF, but as teaching was a reserved profession she remained working on London throughout the war.

She said: “The response to my walks and the messages from friends and former pupils has been overwhelming. It’s really spurred me on. I loved teaching and had a marvellous career.”

Joan’s fundraising page can be found at https://www.justgiving.com/fundraising/joansdailyhike