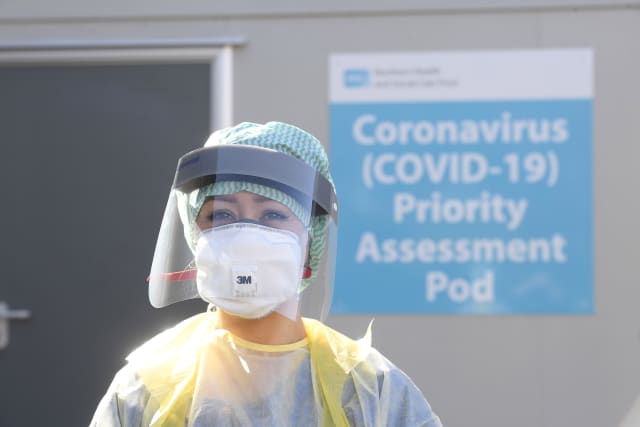 The Government is to rebuild its stockpile of personal protective equipment (PPE), the Health Secretary has announced.

Global shortages of the protective gear frontline staff need to keep them safe left many health and care workers under-equipped while battling Covid-19 during the early stages of the pandemic.

During Tuesday’s Downing Street briefing, Matt Hancock said that “significant progress” had been made with PPE.

He said that the Government was not only keeping up with demand, but is now in a position to replenish stockpiles.

But he also announced that there are still 98 NHS workers in hospital who have tested positive for coronavirus, including some who are “seriously ill”.

“I know how important this is, especially to colleagues on the front line.

“We all heard in the early weeks of the crisis, the calls from the front line for more and better PPE, and we all saw the global scramble to acquire it.

“I have been completely open about the scale and the difficulties of this challenge, building a new supply chain from scratch, and of course the operational challenge of delivery.

“General Sir Nick Carter, chief of the defence staff, said himself this is the single greatest logistical challenge that he’d faced in his 40 years of service.

“And in response to those challenges, thanks to the Armed Forces and to so many others, including so many in the NHS, we’ve seen a mammoth effort.

“We’ve ramped up domestic production. I can announce that we have now signed contracts to manufacture two billion items of PPE here in the UK.

“Around the world, we’ve signed deals with over 100 new suppliers including agreeing contracts for a further 3.7 billion gloves.

“While we continue to improve the logistics and work hard to get everyone, the PPE that they need these new supplies mean that we’re not simply keeping up with demand, we are now able to begin to replenish our stockpiles.

“There is a lot further to go on PPE, as on so many things, but we have made significant progress, and I’d like to thank everybody involved.

“PPE of course is so important, because it’s about protecting the people who protect us. And we’ll do that for as long as the virus remains on these shores.”

Later in the briefing, Mr Hancock was asked about NHS staff not being properly “fit tested” for PPE.

He said: “I know there was some problems with that at the start, I hope we’ve resolved them now. It was all going from needing normal amounts of PPE to needing very high amounts of PPE.”

Issues with PPE have been one of the major issues during the pandemic.

Supply chains around the world broke down as the pandemic took hold in each country.

In the UK, desperate staff described how they were left in tears over shortages, with some being forced to buy their own equipment online and others “hiding” gear in hospital to ensure they had enough for their next shift.

The Government has faced heavy criticism on the issue, particularly over the death of a doctor who died after warning about a lack of the equipment.

Dr Abdul Mabud Chowdhury died in April after being diagnosed with Covid-19. Five days before he was admitted to hospital, Dr Chowdhury, 53, wrote a Facebook post asking Prime Minister Boris Johnson to urgently provide every NHS worker with PPE.

Saffron Cordery, deputy chief executive at NHS Providers, said: “Since the pandemic began, there have been considerable difficulties around PPE, including accessing particular items such as gowns, and the withdrawal of Tiger Eye goggles. The stockpile in the UK was clearly not fit for a coronavirus pandemic.

“However, we recognise that this has been a huge logistical challenge to not only secure kit whilst there is huge global demand, but also operationally to deliver it to the front line.

“It is good to see progress is being made in signing contracts with suppliers for equipment produced here in the UK, as well as securing 100 new suppliers overseas.

“Trusts have also been playing their part in securing more supplies. For example, there’s been an initiative in the north east involving Barbour who have used their factory in South Shields to make gowns for a range of trusts in the surrounding area.”