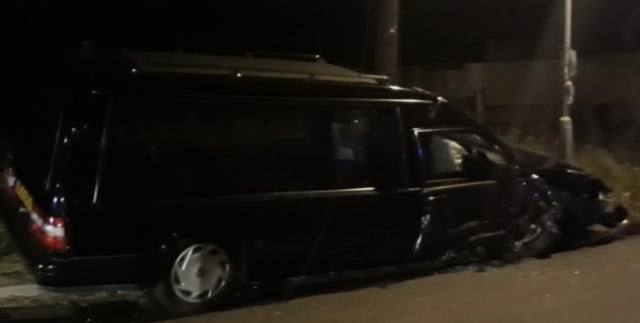 A 24-year-old man has been jailed after a stolen hearse smashed into a passing car – and its driver was attacked.

His co-defendant Alexia Kelly, aged 20, was given a 15-month community order and ordered to do 30 hours of unpaid work at the same hearing last week, police said.

Kelly, of Brockenhurst Gardens, St Ann’s, Nottingham, had pleaded guilty to aggravated vehicle taking by allowing herself to be carried in a vehicle.

In a statement confirming that two other men are still to be sentenced, Nottinghamshire Police said the car driver suffered a broken nose, facial fractures and bruising after getting out of his vehicle to exchange details.

The force said Deville and Kelly were occupants of the hearse, but two other men have yet to be sentenced for their roles in the incident.

Deville, of no fixed address, was jailed for eight months for causing actual bodily harm and received a six-month sentence, to be served concurrently, for aggravated vehicle taking.

He also received additional prison sentences of up to 16 months on unconnected charges, and was banned from driving for 32 months.

The hearse was stolen from within the grounds of Nottinghamshire Funeral Service Ltd in Foxhill Road East, Carlton, and crashed in Gedling shortly after 5am on October 27, 2018.

In a statement, the driver, who was assaulted following the collision, said: “I was on Lambley Lane driving towards the bridge when the dark-coloured hearse appeared.

“I initially saw the headlights as they were coming over the bridge. It was travelling at high speed and this part of the road is a 30mph zone.

“It was travelling much faster than 30mph.

“The hearse lost control as it was coming over the bridge, crossed the road on to my side and smashed straight into the front of me. I was in total disbelief.”

Due to the theft of the hearse, the funeral directors had to rearrange a number of appointments and replace the vehicle due to the damage caused.