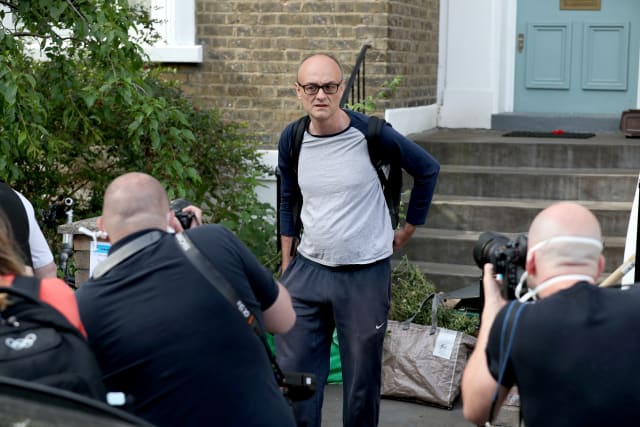 A growing number of Conservative MPs have voiced their frustration over Dominic Cummings after he said that he had “no regrets” about his trip to Durham.

In a press conference on Sunday, Mr Cummings – Boris Johnson’s chief adviser – defended a 260-mile trip from London to the north-east of England he made with his family during lockdown, explaining that he believes he behaved “reasonably”.

However on Tuesday, Douglas Ross, the parliamentary under-secretary of state for Scotland, quit the Government, saying that he could not “in good faith” defend Mr Cummings’ actions.

It follows criticism from a string of Tory MPs, including veteran Sir Roger Gale who said that the Conservative backbench 1922 Committee should make it clear to Boris Johnson that Dominic Cummings should go.

“The time I think has come for Mr Cummings to resign or for the PM to dispense of his services,” Sir Roger said.

The North Thanet MP told the PA news agency: “There are people on the 1922 executive who are courageous, and that’s their job.

“They are elected to tell the PM what he needs to hear, not what he wants to hear.”

Senior Tory William Wragg said that it was “humiliating and degrading” to see ministers put out agreed lines in defence of Mr Cummings.

Mr Wragg, chairman of the Public Administration and Constitutional Affairs Committee in the Commons, said: “We cannot throw away valuable public and political good will any longer.

“It’s humiliating and degrading to their office to see ministers put out agreed lines in defence of an adviser.

“This is a time of national emergency and our focus must be unrelenting. We owe it to the nation.”

Tory MP Caroline Nokes, chairwoman of the Commons women and equalities committee, said she had informed her party whips there could not be “wriggle room” for some people when it comes to lockdown rules.

The former immigration minister tweeted: “I made my views clear to my whip yesterday. There cannot be one rule for most of us and wriggle room for others.

“My inbox is rammed with very angry constituents and I do not blame them. They have made difficult sacrifices over the course of the last nine weeks.”

Conservative MP for Rugby Mark Pawsey said that Mr Cummings had “acted very much against the spirit of the lockdown rules” and should be sacked.

He said: “He (Mr Cummings) has not expressed any regret for the damage his actions have caused to the Government, or to the sense of collective effort in staying at home, protecting the NHS and saving lives.

“Many constituents have pointed out that if everyone had behaved as Mr Cummings did, the success of our lockdown policy would have been undermined.

“Almost every one of them has set out, sometimes in heartbreaking detail, the personal sacrifices that they have made during the immensely challenging months since the coronavirus outbreak.

“As such, I believe that it is wrong that Mr Cummings remains in an important post in Government.