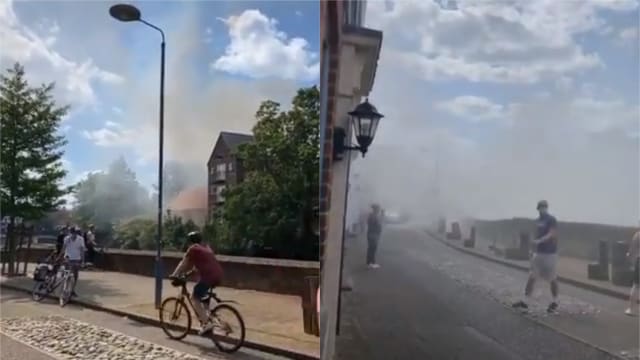 A building fire in Norwich described as “roaring through the roof” has been tackled by local firefighters.

The blaze occurred in Fishergate near the city centre on Monday – local residents were asked to keep their windows and doors closed by the Norfolk Fire and Rescue Service.

“Originally I thought it was my Mac overheating” said Abbie Moir, a freelance videographer and Norwich resident.

“We ran outside to see a huge crowd already looking over the river at a house on fire and smoke covered the whole area.

“I could only see bits but it was roaring through the roof.”

Ms Moir added that she was “pretty sure” the entire roof had collapsed.

“The flames were huge, not something you expect to see,” said Lisa Vincent, another local. “It all took hold so incredibly quickly.

“Then the blocks of flats next door were evacuated, I think. Amazing work from fire crews and emergency services.”

The fire service confirmed that all persons within the buildings had been accounted for, and said that while the fire was still being attended, there was no risk of it spreading.