Fire at Bombardier plant being treated as accidental 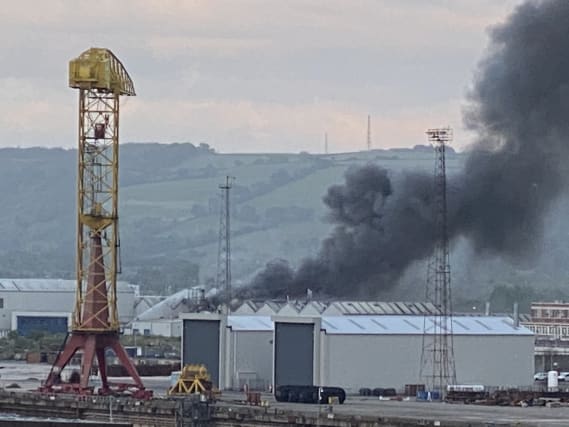 A fire at the Bombardier Aerospace plant in Belfast is being treated as accidental.

Northern Ireland Fire & Rescue Service (NIFRS) said the blaze "appears to have started in machinery" and the cause is under investigation.

"At this stage the cause is believed to be accidental," the service added.

Bombardier said in a statement that it would take time to assess any damage.

Airport Road was cordoned off on Sunday evening as firefighters rushed to the scene, but the plant appeared to be open as usual for workers arriving for their shifts on Monday morning.

NIFRS received the first call about the incident in a factory unit at 8.45pm.

At one stage there were six pumping appliances, one aerial appliance and a high-volume pump, with 50 firefighters and supervisory officers engaged in operations to contain the fire.

NIFRS provided an update at around 11pm to say the incident was "under control".

"Operations are being scaled back with a small number of resources remaining at the scene to damp down," a spokesman said.

Bombardier is one of Northern Ireland's largest employers.

East Belfast MP Gavin Robinson said there was huge concern at the blaze and expressed his gratitude to firefighters for bringing it under control.

He said he had been in touch with Bombardier officials and understood that the damage will be assessed over the coming days.

"There is a huge interest in the company and therefore there was huge concern last night," he told the BBC.

"We all know the huge strategic importance that Bombardier has in Northern Ireland, there is no suggestion and no indication that this will change fundamentally.

"The company is engaged in conversations about acquisition with another aerospace company and that is all still in train."