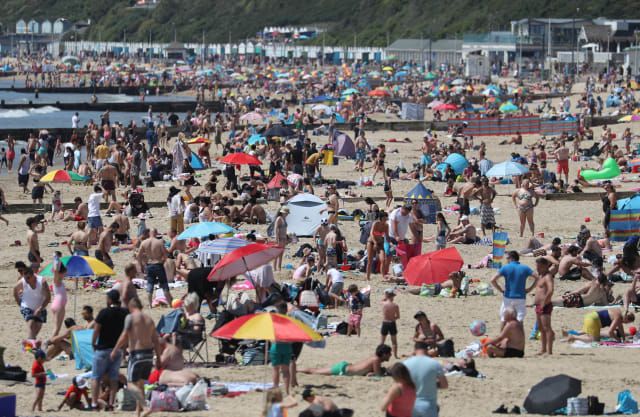 People are being reminded to practise social distancing this week as more fine weather tempts Britons outside.

As lockdown restrictions continue to be eased, crowds flocked to beauty spots on Bank Holiday Monday, raising concerns in some areas.

Police were called to a lido in north London amid reports of one large group gathering, while people were also warned not to overcrowd beaches as sunseekers made the most of the fine weather.

With schools in England, Scotland and Wales on a half-term break this week, large numbers of people are expected to emerge from lockdown amid warm conditions.

The Met Office has forecast mostly dry and warm weather across the country for Tuesday, with London expecting to reach 25C (77F).

There will be more warm weather in the south, where hundreds of people took to Bournemouth beach on Monday, prompting a tweet from the local council reminding people there were “other less busy but equally lovely open spaces to enjoy”.

Aside from some rain for the far north and north-west on Wednesday, for the rest of the week the weather in most parts of the country will be dry, largely sunny, and very warm, the Met Office said.

A week after the relaxation of guidelines to allow people to visit beauty spots in England, the Government and the police have urged people to continue to follow social distancing guidelines.

“Please use common sense when it comes to social distancing,” the Metropolitan Police’s Hillingdon branch tweeted.

Apart from crowds at beaches on Monday, long stretches of traffic were also seen at the Yorkshire Dales, while walkers were also out enjoying the grounds of Windsor Castle.

While new cases and deaths from coronavirus have fallen nationally, a hospital in Somerset was forced to close this weekend due to a high number of Covid-19 patients.

Weston General Hospital, in Weston-super-Mare, stopped accepting new admissions, including into its A&E department from 8am on Monday.

As the hospital shut as a precautionary measure, some residents in Weston reported concern over high numbers of people enjoying a day at the seaside.

Two people died in separate incidents along the Cornwall coastline after warnings RNLI lifeguards would not be able to patrol Britain’s beaches.

It is hoped lifeguard patrols will return to 70 beaches, which will be chosen based on risk and popularity, by peak season.

Sturgeon visits a bar in Edinburgh ahead of its reopening