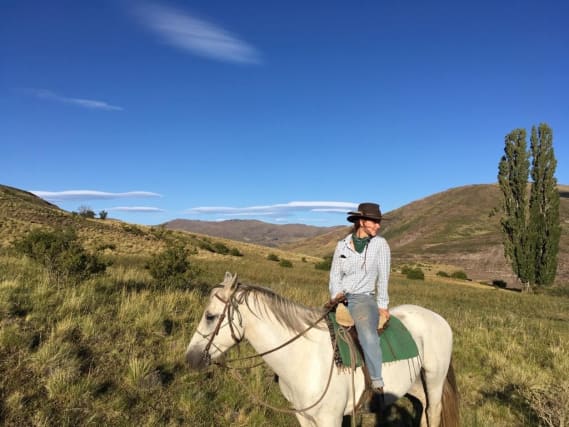 A British tourist, stranded in Patagonia because of the coronavirus lockdown, has finally returned five weeks later than planned, having journeyed by bus, taxi, plane and horseback to get back.

Annabel Symes, 19 from Eastbourne, was fulfilling the “dream of a lifetime” working as a volunteer hosting tourists at a remote ranch in the foothills of the Andes.

The ranch, which is the size of the Isle of Wight, is more than 1,000 miles from Buenos Aires, and half a day’s horseback from the nearest road.

Originally due to return home in April, her flight was cancelled when Argentina introduced sweeping travel restrictions to contain the spread of Covid-19.

Having called the Foreign Office for help, they organised a return journey that involved half a day’s horseback ride to the nearest road, a nine-hour taxi journey to the nearest town and finally a 17-hour bus ride to Buenos Aires airport.

Ms Symes and her partner, an American citizen, had to ride to the road in the dark, finding their way using the full moon, with mules carrying their bags.

From there they took a taxi which was sprayed with disinfectant at every checkpoint along the way.

British Embassy staff had to negotiate travel permits with local authorities from the different regions so they could organise bus travel, book taxis and facilitate cross-country travelling.

The couple returned home alongside 200 other British travellers from Argentina on May 8.

In a region where temperatures plunge below zero, heavy snowfall would have made leaving the ranch impossible, and with the summer season ending riskier.

To make matters worse, Ms Symes had only packed clothing for summer.

Ms Symes said: “Once I realised I was stranded, I registered with the British Embassy.

“Communication was made challenging as the estancia only had patchy internet access via satellite which meant lots of cold WhatsApp conversations sitting on a tree stump in the middle of a field.”

Foreign Secretary Dominic Raab said: “We are delighted to have been able to help Annabel get back home.

“Since the start of the coronavirus outbreak, the Foreign Office has been working with airlines and governments to keep vital routes open, helping more than 1.3 million travellers return to the UK on commercial flights.

“We also made £75 million available for special return flights, so far bringing home more than 33,000 people from countries without commercial options.”