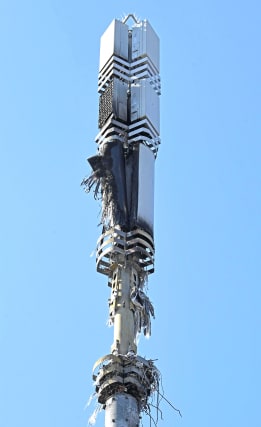 An arson investigation has been launched after a 5G mobile phone mast was torched.

Derbyshire Police appealed for witnesses after the fire brigade were called to the blaze off Scarborough Drive in the Chaddesden area of Derby, at 2am, Sunday.

In a statement, the force said: “We believe the fire was started deliberately and we are investigating.”

It follows more than 50 incidents nationwide, believed to be linked to false claims the 5G network is spreading coronavirus.

The attacks prompted action from social media giants Twitter and Facebook to crack down on accounts pushing “unverified claims”.

One MP, who launched a fact-checking service, also called for a new law to be introduced to stop persistent spreaders of disinformation online.

Conservative MP Damian Collins, who set up Infotagion to combat falsehoods during the pandemic, said: “It’s not good enough that we just have to remove certain posts that are wrong.”

Mr Collins added that famous figures with large followings also needed to act more responsibly with what they share online.

In April, This Morning presenter Eamonn Holmes was issued guidance by media watchdog Ofcom after he made comments on TV relating to Covid-19 and 5G.

More recently, Mark Zuckerberg has defended Facebook’s record of combating misinformation on the social network during the coronavirus outbreak.

The Facebook founder and chief executive said the platform removed all content which “puts people in imminent risk of physical harm”.

He added that 5G misinformation, which he acknowledged had been “very prevalent” in the UK and has led to a number of phone masts been attacked, is considered an imminent threat and would be removed immediately.