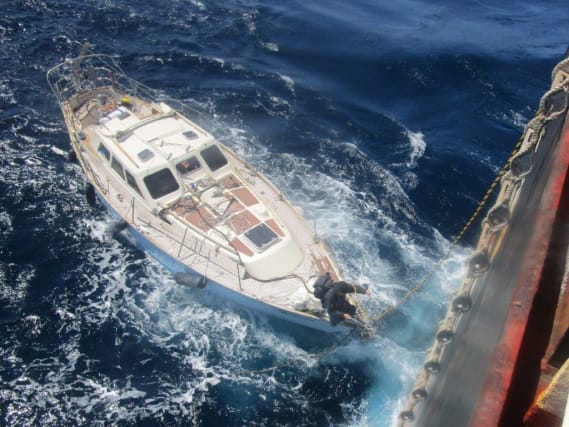 A sailor whose yacht became stuck 500 miles off the coast of Cornwall has been rescued.

A beacon alert was received for the UK-registered Helena in an area 500 miles south west of Lizard Point, at around 12.20am on Friday, the Maritime and Coastguard Agency said.

The lone sailor’s 10-metre vessel was located drifting without a mast in the Atlantic by a French maritime patrol aircraft, according to the agency.

HM Coastguard – co-ordinating search and rescue efforts – said it had successfully made contact with the vessel’s skipper and discovered he was uninjured.

An oil tanker offered assistance during the rescue efforts despite being more than 20 hours away and up against 3-4 metre swells.

The yachtsman was helped on board the 229-metre Seaways Reymar commercial vessel on Saturday afternoon.

HM Coastguard controller Matthew West said: “This long distance rescue has involved coordination with the French Maritime Rescue Coordination Centre and support from the RAF because at 500 miles offshore it is well beyond the range of rescue helicopters.

“The yachtsman was rescued by tremendous seamanship demonstrated by the master and crew of the Seaways Reymar, who diverted their course and remained on scene for eight hours to ensure the safe recovery of the sailor.

“As well as the skipper’s EPIRB satellite beacon which first alerted us to the situation on Friday, we were also aided by the fact that the vessel was transmitting on AIS which was very helpful in pinpointing the position of the yacht.”

Man shot in leg amid rash of gunfire incidents in Birmingham