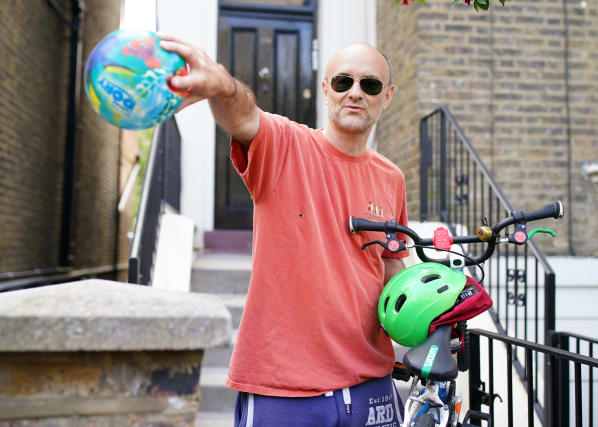 Dominic Cummings has said he "behaved reasonably and legally" when he travelled from his London home to County Durham during the lockdown.

Opposition MPs have accused Number 10 of a "cover-up" and called for the Prime Minister's top aide to resign after it emerged that he had driven 250 miles despite the guidelines on travelling.

But Mr Cummings told reporters: "I behaved reasonably and legally."

When a reporter suggested to him outside his London home that the trip to Durham did not look good, he replied: "Who cares about good looks.?

"It's a question of doing the right thing. It's not about what you guys think."

His comments follow a statement from Downing Street, in which Number 10 said the actions of Boris Johnson's chief adviser were in line with guidelines, and reports that his family were spoken to by police were incorrect.

A spokesman said: "Owing to his wife being infected with suspected coronavirus and the high likelihood that he would himself become unwell, it was essential for Dominic Cummings to ensure his young child could be properly cared for.

"His sister and nieces had volunteered to help so he went to a house near to but separate from his extended family in case their help was needed.

"His sister shopped for the family and left everything outside.

"At no stage was he or his family spoken to by the police about this matter, as is being reported.

"His actions were in line with coronavirus guidelines. Mr Cummings believes he behaved reasonably and legally."

Durham Constabulary said in a statement on Friday that officers contacted the owners of a property in County Durham on March 31, more than a week after the lockdown had been imposed by the PM.

The PA news agency asked if Durham Police were going to provide an updated statement but they declined to comment further.

Speaking on Friday, a spokesman for the force said: "On Tuesday, March 31, our officers were made aware of reports that an individual had travelled from London to Durham and was present at an address in the city.

"Officers made contact with the owners of that address, who confirmed that the individual in question was present and was self-isolating in part of the house.

"In line with national policing guidance, officers explained to the family the arrangements around self-isolation guidelines and reiterated the appropriate advice around essential travel."

In a statement, the former head of the Police Federation in England and Wales said it was "most unwise" for the Downing Street adviser to have travelled when "known to be infected".

The SNP's Westminster leader, Ian Blackford, in an interview earlier on Saturday, said there were "serious questions" for Mr Johnson to answer.

According to a joint investigation by the Guardian and Daily Mirror, Mr Cummings was spotted twice in the North East over the course of almost a week, between March 31 and April 5.

Speaking to BBC Radio 4's Today programme, Mr Blackford said: "What I find interesting is that (according to reports) members of Downing Street knew about this so, first and foremost, Boris Johnson has serious questions to answer over what now appears to be a cover-up.

"The Prime Minister must explain exactly when he knew about the breaking of the rules, whether he sanctioned it, why Cummings wasn't sacked immediately and why it appears that he tried to cover it up, not telling the public until the newspaper(s) broke the story, eight weeks later, last night."

But Cabinet Office Minister Michael Gove, who used to employ Mr Cummings, spoke out on his behalf, tweeting: "Caring for your wife and child is not a crime."

Mr Hancock tweeted: "I know how ill coronavirus makes you. It was entirely right for Dom Cummings to find childcare for his toddler, when both he and his wife were getting ill."

Downing Street had previously confirmed that Mr Cummings had started displaying coronavirus symptoms "over the weekend" of March 28 and 29.

On April 5, Mr Johnson was admitted to hospital with coronavirus symptoms and later required treatment in intensive care.

An unnamed neighbour told the two papers that on the same day Mr Cummings was seen in the garden of his parents' home in Durham as Abba's Dancing Queen was playing loudly.

"I got the shock of my life, as I looked over to the gates and saw him," they said.

Former Conservative MP David Lidington, who was de facto deputy PM under Theresa May, was among those saying the news raised serious questions.

He told BBC Newsnight: "There's clearly serious questions that Number 10 are going to have to address, not least because the readiness of members of the public to follow government guidance more generally is going to be affected by this sort of story."

And Labour said the Downing Street statement raised "more questions than it answers".

A party spokesman said: "We are still unclear who knew about this decision and when, whether this was sanctioned by the Prime Minister and whether Number 10 is now questioning the validity of the statement from Durham Police."

When Professor Neil Ferguson, the epidemiologist whose modelling prompted the lockdown, quit as a member of the Scientific Advisory Group for Emergencies (Sage) for flouting distancing rules when he was visited by his girlfriend, Health Secretary Mr Hancock said he was "speechless".

Government guidance strongly urges people to stay away from the elderly during the pandemic, classing those over 70 as a vulnerable group.

– Businesses will be told by Chancellor Rishi Sunak that they will have to pay at least a fifth of the wages of furloughed workers by August, according to a report in the Times.

– The so-called R-number, the average number of people that will contract coronavirus from an infected person, was between 0.7 and 1.0 across the UK two to three weeks ago – slightly higher than the last rate declared by ministers.

– The number of deaths involving Covid-19 in the UK passed 45,000, according to the latest available data.

The news about Mr Cummings comes as authorities managing beaches and beauty spots are bracing for a big influx of visitors over the bank holiday weekend, expected to put social distancing rules under strain.

Following the easing of some lockdown measures last week, there are no restrictions on how far people can go to get to the countryside, National Parks and beaches in England.

But the authorities in many tourist hot spots, including Brighton, Hastings and the Isle of Wight, are urging people to stay away.